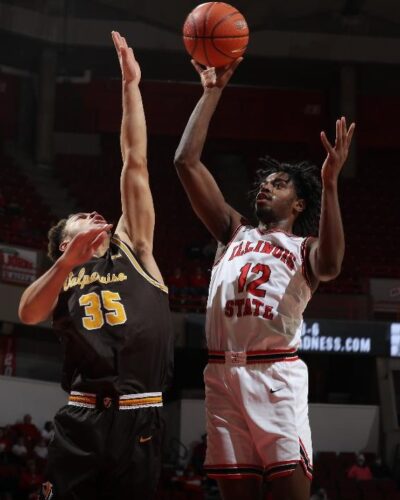 Home » Gery's Blog » Prize recruit Antonio Reeves is taking calls from all over the country, including Wisconsin

It wasn’t like Antonio Reeves’ cell phone was blowing up.

No, when Reeves was in his senior season at Simeon High School in Chicago and enjoying a stellar season, the bluebloods of college basketball weren’t calling.

In fact, as Reeves recalls, he didn’t even need all the fingers on his two hands to count the number of Division I scholarship offers that were extended to him.

And they were from mid-to-low major schools. When the dust settled, Reeves opted for Illinois State and Southern Illinois.

While Reeves was grateful that the Illinois State coaching staff had faith in his basketball skills and upside, he was, in his heart of heart, admittedly disappointed.

Reeves harbored hopes of attending the University of Wisconsin. Unfortunately for Reeves, the level of interest wasn’t mutual.

“One of their assistant coaches watched me and said they were interested in me,’’ Reeves said. “Wisconsin’s a really good school. They play in the Big and they have a winning program. “But they didn’t offer me. I was disappointed. I did want to go there, but I kept moving on. I just kept my head up and kept going.’’

Reeves’ positive attitude and his unshakeable confidence in his basketball abilities have handsomely paid off. Last season, his third at Illinois State, the 6-foot-6 multi-positional Reeves averaged 20.1 points. That ranked 19th in Division I.

He recorded 18 games of 20 or more points. One of those games came against Wisconsin at Madison on Dec. 29. That’s when Reeves totaled 25 points in the Redbirds’ 89-85 loss to the Badgers.

Reeves finished the season shooting 47 percent from the field and 39 percent on 3-pointers.

With drastic improvement as a player, along with Illinois State’s decision to fire head coach Dan Muller, Reeves decided recently to enter the transfer portal.

His phone is blowing up now. He’s been contacted by virtually every major college program in the country. Among them are Duke, Kentucky, Memphis, Texas Tech, Alabama, Ohio State and Louisiana State.

Sources also said Purdue and Michigan are interested in Reeves as are defending NCAA champion Baylor and Houston, which has made deep NCAA Tournament runs the last two seasons.

And, there’s another school: Wisconsin. The Badgers have a gaping hole at shooting guard with All-American shooting guard Johnny Davis’ decision Thursday to enter the NBA draft.

“I’m still weighing my options. I have to really figure out what I’m going to call my home next. I’ll make a couple of visits and see what’s out there. I want to try and get my college degree.’’

Reeves, whose major is family consumer science education, is allowed a maximum of three visits, under NCAA rules. He figures to start taking them in a couple of weeks.

“It’s been a tough the last couple weeks with all those calls,’’ said Reeves, whose uncle is former Milwaukee Bucks star guard Sam Cassell. “I wouldn’t say I’ve been blown away (by all the interest). I put in the work. I know what I’m capable of doing.’’

Previous: Packers have more than passing interest in Arkansas’ Burks
Next: Tapp: Craig Counsell may be Brewers’ best manager ever