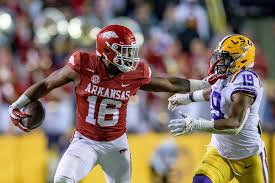 If there was a scintilla of doubt the Green Bay Packers hope to snap their two-decade drought of not drafting a receiver in the first round of the NFL draft, they were emphatically dispelled at the NFL Combine earlier this month.

Jameson Williams, the former Alabama star receiver, and Chris Olave, the ex-Ohio State star receiver, both confirmed to me they had lengthy discussions with the Packers at the Combine in Indianapolis.

In fact, Olave, without being asked about whether he’d like to be a Packer, said, “I’d love to be a part of that organization.’’

Suffice to say, Gutekunst & Co. weren’t going to waste their time formally interviewing Olave and Williams, and others, if they weren’t more than a tad interested in selecting them in the draft, which is set for April 28-30 in Las Vegas.

Further indication the Packers are keenly interested in tabbing a receiver in the first round – they currently have the 22nd and 28th overall picks – is the news they have extended an invitation to Treylon Burks, a highly regarded receiver from Arkansas, to come to Green Bay for an even more in-depth interview.

Again, the Packers aren’t bringing Burks to Green Bay for their health.

Burks, along with Olave and Williams, are considered in the second tier of receivers in this draft. Drake London of Southern Cal and Garrett Wilson of Ohio State are considered the crème de la crème of the receiving prospects. Both are virtually locks to be among the top 15 picks.

Where Olave, Williams and Burks wind up in the draft is anyone’s guess. Olave was projected by several NFL scouts to possibly be available for the Packers when they had just the 28th pick – ahead of securing the 22nd pick in a trade that sent Davante Adams to the Raiders.

But Olave raised eyebrows when he ran the 40-yard dash at 4.39 seconds at the Combine, the eighth-fastest among the receivers group.

Williams is also a burner and, most likely, would have been the first receiver off the draft board if he hadn’t torn his anterior cruciate ligament in the national title game on Jan. 10.

By all accounts, Williams’ recovery is going well, yet some NFL officials wonder just many games he’ll be able to play this season.

Barring something unforeseen, Burks will be available from day one. Burks doesn’t have the blazing speed of Olave or Williams; in fact, Burks was timed at 4.55 at the Combine. There was more skepticism about Burks’ speed after he opted not to run the 40 at his pro day because of cool conditions.

Yet, there are more than a few NFL scouts who dismiss Burks’ alleged lack of breakaway speed based on what they’ve seen either personally in games or on game film.

“I never saw him get caught after he was open,’’ a scout insisted.

While some may question Burks’ speed, he is an top-tier athlete. He finished 10th in the 3-cone drill at the Combine at 7.28 and went 10-3 in the broad jump – just two inches behind Olave and one behind Wilson.

What has NFL officials salivating about Burks is his size, strength, catching ability and versatility, He has drawn comparisons to Deebo Samuel of the 49ers and A.J. Brown of the Titans because of his physical stature and style of play.

Besides the Packers, several other teams drafting just ahead or behind the Packers at 22 are showing interest. The Eagles, who have three first-round picks (Nos. 15, 16 and 19) are clearly targeting a receiver. The Patriots (No. 21), Cardinals (23), Bills (25) and Titans (26) are also in the market for a receiver.

It is generally expected Burks won’t get past the Cowboys, who have the 24th pick and already hosted him. The Cowboys are pursuing a receiver after losing Amari Cooper and Cedrick Wilson. Cowboys owner Jerry Jones, who attended Arkansas and played football for the Razorbacks, is also a big Burks fan.

“He (Burks) might not have stop-watch speed,’’ said a longtime NFL scout. “But he is a big, strong outside receiver who beats coverage downfield and consistently wins in traffic. To me, he’s a Dez Bryant type of talent.’’

Whether the Packers select Burks with one of their first-round picks and make him the first receiver taken by the franchise in the first round since it took Javon Walker with the 20th overall pick in 2002 remains to be seen.

What is clearly obvious, though, is the Packers fully intend on choosing a receiver with one of them.

Previous: Milwaukee’s Baldwin ready to take his game to next level
Next: Prize recruit Antonio Reeves is taking calls from all over the country, including Wisconsin