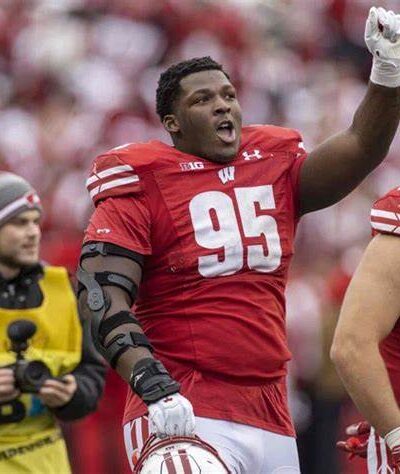 Keeanu Benton’s status in this year’s NFL draft should be coming more into focus in the next couple of weeks.

Benton, the former standout defensive tackle for the University of Wisconsin, will be competing in the upcoming Reese’s Senior Bowl in Mobile, Ala.

The week-long event attracts general managers, coaches and scouts from all 32 NFL teams. It is a critical piece in the NFL draft evaluation process.

Prior to his Senior Bowl appearance, Meinerz was a projected as a late-round pick. He wound up being taken in the third round by the Denver Broncos, the 98th overall selection.

Benton’s appears to be in a better draft positon than Meinerz  going into the Senior Bowl as he is projected to be taken in the third-round range of the seven-round draft.

The 6-foot-4, 315-pound Benton, who grew up in Janesville, WI and attended Janesville Craig High School, is coming off a stellar season at Wisconsin. He recorded 35 tackles, including 10 for a loss, in 12 games. He also had 4½ sacks.

He was an All-Big Ten Conference third- and second-team selection the last two years.

“He is training in Atlanta with Chuck Smith, the renowned defensive line specialist,’’ said Ken Sarnoff, Benton’s Chicago-based agent. “He’s preparing for the Senior Bowl and is really excited about it. He’s going to put on a show.’’

The Reece’s Senior Bowl game is set for Feb. 4. It will be carried by the NFL Network, starting at 1:30 p.m.

The Green Bay Packers have consistently drafted players who participated in the Senior Bowl, which has been around since 1950.

In the 1958, the Packers chose three Senior Bowl players – Ray Nitschke, Jim Taylor and Jerry Kramer — and all of them are now in the Pro Football Hall of Fame.

Another Senior Bowl player chosen in last year’s draft was Wisconsin tight tend Jake Ferguson, who was picked in the fourth round by the Dallas Cowboys. Ferguson enjoyed a solid rookie season with 19 catches for 174 yards and two touchdowns.

Bisaccia’s loss could have ripple effect

If the Indianapolis Colts hire Rich Bisaccia as their head coach, it could be a major loss for the Packers.

Nixon spent his first three seasons with the Raiders, where Bisaccia had been a head and assistant coach, before signing a one-year free-agent contract with the Packers last March.

It turned out to be a coup for the Packers. Nixon led the NFL in kickoff return yards (1,009) and averaged a lofty 28.8 yards per return. He also finished second in the league in punt returns at 12.7 yards.

“Richie absolutely loves Keisean,’’ said a former Raiders official. “He always went to bat for Keisean. There were times when it didn’t look like he (Nixon) was going to make our team but he (Bisaccia) stood up for him. He always had his back.’’

Nixon is a free agent and indications are he wants to stay in Green Bay. But that could change if Bisaccia moves on to Indianapolis.

Previous: Antetokounmpo needs to talk to Middleton about his free throw shooting woes