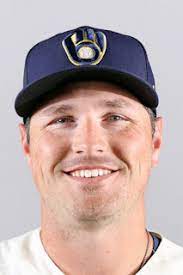 The Brewers maintain a three-game lead in the National League Central over the St. Louis Cardinals. The Crew has won seven of their first nine games after the All-Star break and one reason is the power supply offered by right-fielder Hunter Renfroe. He has slugged six long balls in those nine games.

There have been 12 Brewers players who have hit 20 or more home runs in the second half (after the All-Star break) of a season. They are:

•    If you have watched any Brewers games on TV, you have likely heard the announcers mention that the team needs to score four or more runs to win a game. Through games of July 31, the team is 47-15 (.758 winning percentage) in games where they score four or more runs. That means the team is horrible 10-30 (.250) when they score less than four runs in a game. In addition, the Brewers are 32-9 when they hit two or more home runs in a game, a .780 winning percentage; and they are 20-8 (.714) when they get 10 or more hits in a contest.

Previous: Rodgers sets the bar for not turning the ball over
Next: Bill Russell compiled some amazing numbers