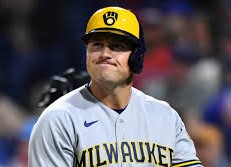 Home » Guest Post » Brewers hitters have a season not to remember

It took until Game 160 this year, but with Philadelphia’s win over Houston on Monday, the Brewers were finally eliminated from the 2022 MLB post-season.

In the upcoming weeks and months, the team and its fans will spend endless hours dissecting the season to answer what went wrong. Likely targets will be a shaky bullpen, a trade of Josh Hader, injuries among the starting pitchers, and other factors.

Many people, however, will likely point to one aspect of the team 2022 performance for not making the playoffs: hitting..

Before we get to the hitting woes, let’s start with a few positive stats. A lot of baseball pundits will tell you that pitching and defense win championships. In many respects, the Brewers had that covered. Defensively, they had 91 errors, the second fewest (they had 89 errors in 1992) in a full season for the team in its 54-year history. Their .985 fielding average was tied for the second-best in team history (the 1992 squad tops the list at .986).

On the pitching front, 52 saves for the season were second most in team history as were 1,530 strikeouts, and the team WHIP of 1.216 was also second lowest in Brewers history.

So, you could make a case that the Brew Crew had their defense and pitching set up for success in 2022.

Now to the hitting. Consider this:

• The Brewers 2022 batting average of .235 was tied for the fifth worst in team history

• Their 1,464 strikeouts were the fifth most in team history.

Individually, the Brewers did not have one hitter with an average over .260 (with a significant numbers of plate appearances). Sure, they were third in the majors with 219 HRs, but that was one of the few offensive stats where they were near the top of MLB leaders.

Using the Stathead feature on the baseball-reference.com website, there is a telling stat that exposes the Brewers batting average woes from this past season.

Of the nine players who played in 100 or more games for the Brewers this year, none finished in the Top 200 for batting average in Brewers history. Highest finisher from 2022 was Hunter Renfroe who is listed at 263rd on the list with his .255 average.

It was the first time in team history that the Brew Crew did not have a player with a batting average of .260 or above for the season (minimum of 100 games played).

Add to this the fact that the primary catching chores were handled by two players, Omar Narvaez and Victor Caratini, who although they did not qualify for the above lists because they played in less than 100 games on the season (Caratini, 95 and Narvaez, 84) had less than stellar batting averages on the year … Narvaez ended the year at .206 while Caratini finished the season at .199.

Hopeful to return to the post-season in 2023, the Brewers will clearly have to address their hitting. They seem to have the pitching needed (save for some rework of the bullpen), and their defense was solid in ’22. Hitting, however, is a concern.