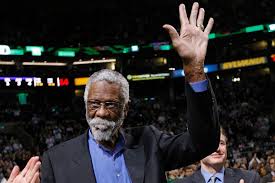 The NBA lost one of its most iconic legends when Bill Russell passed away on July 31 at the age of 88. Russell was a 12-time All-Star, won 11 World Championships with the Boston Celtics, and was the league MVP five times.

Here are 12 stats you need to know about the legacy of Bill Russell:

1.    Russell made his NBA debut on December 22, 1956 in the Celtics 95-93 win over the St. Louis Hawks. He had a less-than-Hall-of-Fame-worthy game in his debut. He played 21 minutes, shot three-for-11 from the field, and missed all four of his free throws. He finished with six points. He did, however, grab 16 rebounds. At that time, it was the second most rebounds by a rookie in his first NBA game.

2.    He had more rebounds than shots taken at the end of every season of his career.

7.    Bill was one of 124 NBA players who was born in Louisiana. He is number one on that list of Louisiana-born players in career rebounds, fifth in assists, and 10th in points. He was one of nine players born in Monroe, Louisiana.

8.    He is one of 25 players who went to college at San Francisco who played in the NBA. He ranks first in points, rebounds, and assists of those players.

9.    Bill Russell was the second overall pick in the 1956 draft by the St. Louis Hawks. On that same day he was traded to the Celtics for Cliff Hagan and Ed Macauley. The overall number one selection in that draft was guard Si Green from Duquesne who was drafted by the Rochester Royals. Green had a nine-year career in the NBA averaging 9.2 points per game.

10.    Russell played in 29 different playoff series in his career. He came out on the losing end in only two of those series: 1958 in the NBA Finals to St. Louis; and 1967 in the Eastern Division Finals to the Philadelphia 76ers.

11.    Russell was born on February 12, one of 12 NBA/ABA players born on that date. He ranks second on the list for most points scored by a player on February 12 behind Larry Nance.