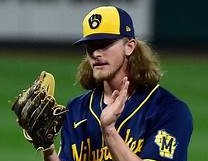 Home » Guest Post » For the records, Brewers, Hader are off to stellar starts

With their 7-0 loss to San Diego on Friday, June 2, the Milwaukee Brewers finished the first one-third of the season (54 games in a 162-game schedule) with a 33-21 record. That is good enough for a first-place spot in the N.L. Central, two games ahead of the St. Louis Cardinals.

There is a long way to go before the end of the season, but the team and a few individuals are on pace to make a run at a few records. Here is a look at a few marks that may be in jeopardy.