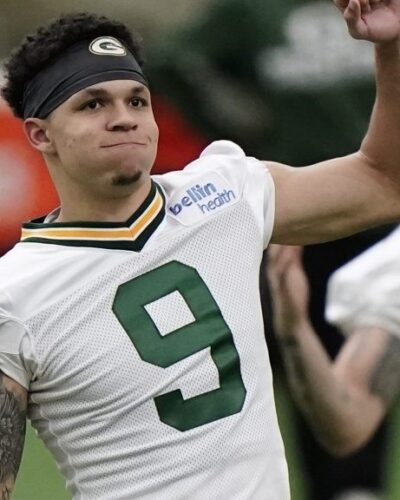 Anyone who follows the Green Bay Packers knows the team needs to fill some major needs at the wide receiver position. One move to fill the gap left by Davante Adams is the team’s drafting of Christian Watson. And if the media and social media’s early reports on Watson are to be believed, the Pack may have found a star in the making. One problem: Watson has yet to play a single game in the NFL.

That being said, early reports are encouraging: Green Bay’s offensive coordinator Adam Stenavich was reported to have said Watson is “going to be a problem” for opposing defenses. Current Packers receiver Randall Cobb opined that Watson has the “total package.” And others associated with the team have thrown out one word, “Dangerous,” to describe Watson.

What will Watson need to accomplish this season to meet and exceed the Packers hopes for him in 2022? Tough question to answer. But let’s look at what the best rookie receivers have accomplished for the team. Here are the Green Bay Packers rookie records for most catches, yards and TD:

The Packers would probably be happy if Watson exceeded these numbers and topped the Packers rookie receiving stats with 56+ catches, for 1,232 yards and 14 TDs… highly unlikely, but a good goal to shoot for.

The NFL rookie receiving records for these three stats is another goal for Watson to shot for. The catches and yardage records were just broken last season; Miami’s Jaylen Waddle broke the NFL rookie catches record of 101 with 104 catches last season, while Ja’Marr Chase of the Bengals topped the league record for receiving yards of 1,400 with 1,455 last year. The league record for most receiving TDs by a rookie is 17 held by Randy Moss of the Minnesota Vikings in 1998.

Previous: Wisconsin’s reputation for developing high level basketball players is growing
Next: For the records, Brewers, Hader are off to stellar starts