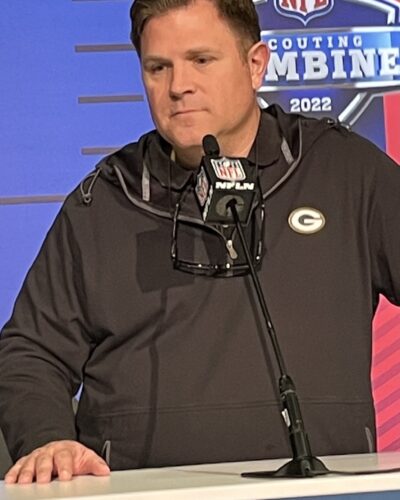 The Green Bay Packers are not only in an enviable position but a highly unusual one heading into Thursday’s NFL Draft.

The Packers have a whopping four picks in the first two rounds: Nos. 22 and 28 in the first round and Nos. 53 and 59 in the second round.

It isn’t often a team has four high picks. In fact, in the long, storied history of the Packers, it has happened only one time. That was way back in 1967.

That’s when the Packers used the ninth  overall pick to select center Bob Hyland and the 25th pick to tab quarterback Don Horn. Then, in the second round with the 41st and 53rd picks, Green Bay chose receiver Dave Dunaway and linebacker Jim Flanigan.

Hyland has a nice pro career, playing four seasons for the Packers before moving on and playing for Chicago, the New York Giants and New England Patriots. Horn spent four non-descript seasons with the Packers (16 TDs, 22 INTs) before joining Denver, Cleveland and San Diego.

Dunaway’s NFL career was short and not sweet. He played just two seasons with three teams: Packers, Atlanta and New York Giants. Flanigan spent his entire rookie on the taxi squad and then was cut the following season. His pro career lasted just four seasons.

While the aforementioned picks from the ’67 draft made minimal impact with the Packers, Travis Williams did. William was the team’s fourth-round selection and became one of the most feared kick returners in NFL history.

Nicknamed “Roadrunner’’ for his blazing speed, Williams returned four kickoffs for touchdown in his rookie season, an NFL record. He also averaged 41.06 yards on kickoffs to set an NFL single-season record, one that still stands today. He was inducted into the Packers Hall of Fame in 1977.

Brian Gutekunst has been the Packers’ general manager for four seasons. His record for picking players in the first two rounds has been stellar.

While the Packers are positioned to make a draft haul, it’ll be virtually impossible for them to replicate the results of the Packers’ 1958 draft class.

That’s when the Packers drafted three – repeat, three – future Hall of Famers. That trio of studs was fullback Jim Taylor in the second round, middle linebacker Ray Nitschke in the third round and guard Jerry Kramer in the fourth round.

The Packers first-round pick was linebacker Dan Currie who, while not a Hall of Famer, nevertheless had a quality seven-year career with the Packers. He is a member of the Packers Hall of Fame.

The Packers currently have the 22nd and 28h overall picks in the draft. Here are the players drafted at those spots in the last five years:

Best draft pick in Packers’ history? It’s hard to imagine anyone who was better in relationship to where he was drafted than the legendary Bart Starr. He was taken in the 17th round of the 1956 draft. Starr was the 200 pick in that draft – which would be the equivalent of a seventh-round selection in today’s NFL draft. … The NFL draft is now seven rounds, but from 1943 until 1948, the draft went 32 rounds. … The Packers are expected to draft a receiver in the first round, which is out of character for the franchise. Since 1972 – or the last five decades – the Packers have used first round picks on a receiver just four times: Barry Smith (1973), James Lofton (‘78), Sterling Sharpe (‘88) and Javon Walker (2002).

Previous: Packers don’t need a center, but they could still draft one … in the first round
Next: When drafting, Packers prefer Bruins, Bulldogs