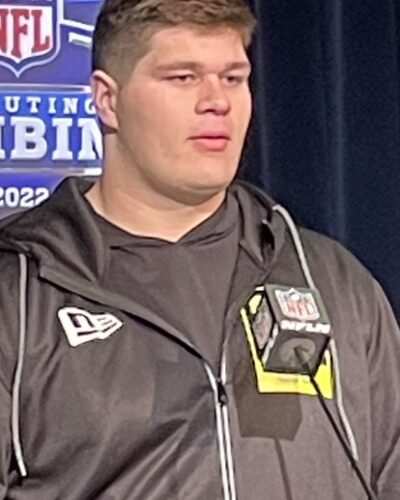 Home » Gery's Blog » Packers don’t need a center, but they could still draft one … in the first round

If you were to rank the Green Bay Packers’ primary needs going into next week’s NFL draft, a center wouldn’t be one of them.

In fact, center would be near the bottom of their needs.

After all, the Packers expended a premium pick – a second rounder – in last year’s draft on Josh Myers. It’s looking like an excellent choice. Myers immediately stepped into the starting lineup and performed at a high level for a rookie.

But despite Myers’ talents and upside, there are some NFL officials who aren’t dismissing the possibility of the Packers using one of their two first-round picks on a center. The Packers, as of now, have the 22nd and 28th picks in the first round of the draft, which commences Thursday night in Las Vegas.

The reasoning behind the scouts’ contention of the Packers taking a center is this: Tyler Linderbaum of Iowa could fall to the tail end of the first round and, if the Packers adhere to taking the “best’’ player available, he would be hard to pass on.

And there’s another reason why the Packers could tab Linderbaum: Myers, while a top-notch center, could also be a top-notch guard. Thus, if the Packers drafted Linderbaum, he would be surrounded by Myers on the right side and Elgton Jenkins on the left side. That trio of interior linemen would be one of the finest in the NFL.

Of course, there’s a distinct possibility Linderbaum will be off the board before the Packers make their first-round picks. More than a few NFL talent evaluators rate Linderbaum one of the top 15 players in the draft. Some have him ranked even higher.

But because he plays strictly center, the general consensus among scouts is the 6-foot-2, 302-pound Linderbaum will fall into the 20s. At that stage, Linderbaum would be a flat-out steal for a team craving a center. Linderbaum, who was the recipient of the prestigious Rimington Trophy, possesses all the ingredients to be an eventual Pro Bowl center.

Linderbaum is extremely athletic for any positional lineman: He competed in baseball, track, wrestling and football in high school and has gone 32½ inches in the vertical jump. After a foot injury prevented him from working out at the Combine in Indianapolis last month, he exhibited his athleticism at his pro day last Monday.

While his athleticism is impressive, NFL personnel are more impressed with Linderbaum’s production. He comes to play every game.

“He has all the tools to be an eight, nine-year starter,’’ an NFL scout said of LInderbaum, whom the Packers formally interviewed at the Combine. “He has the smarts, he competes, he’s technically sound, good in space and very consistent.’’

Added the scout: “That guy is tough and athletic. He’s going to be a really quality starter for a long time.’’

Previous: What does history tell us about the Bucks’ chances of repeating as NBA champs?
Next: Packers are in enviable, unusual draft position