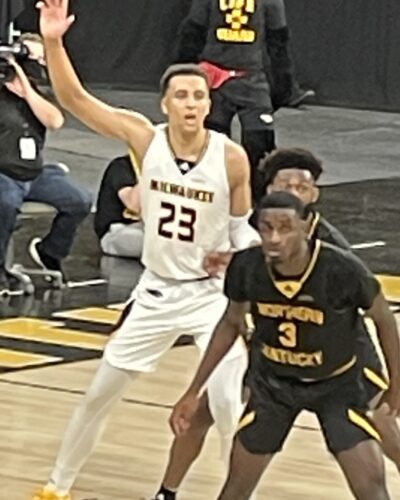 You couldn’t fault Patrick Baldwin Jr. for wanting to put the last year in the rear view mirror.

It seems like little went his way in the last 12 months or so, starting with a serious ankle injury that sabotaged his promising senior season of basketball at Hamilton Sussex High School.

The injury remained an issue after he opted to sign a national letter of intent with the University of Milwaukee and play for his father, Pat, while shunning offers from every national powerhouse, including Duke and Kentucky.

Yet, Baldwin’s frustrations this season weren’t limited to his ankle. He also came down with COVID, forcing him to miss several games.

Baldwin wound up playing just 11 games and his numbers, which would have been very good for most freshmen, were viewed as underwhelming by some observers: He averaged 12.1 points and 5.8 rebounds.

As one might suspect, Baldwin’s stock for the NBA draft in June has dipped. Once considered a sure-fire top 10  draft pick, Baldwin is now being projected in some mock drafts as a late first-round selection.

But that’s now how he’s being regarded by some veteran NBA executives – at least two of them, both with more than two decades of NBA eperience.

“I know he had a rough season – he couldn’t catch a break — but we know what he’s capable of doing,’’ said a Western Conference exec. “I still have him going pretty high; I have him at the back end of the lottery (the top 15 picks).’’

An Eastern Conference exec has Baldwin ranked a little bit farther down the draft ladder.

“Right now, I got him being taken between 15 and the early 20s,’’ the Eastern Conference exec said. “There’s still plenty of time before the draft, so things could still change.’’

Indeed, a slew of NBA teams are undoubtedly going to get an up-close-and-personal look at Baldwin in workouts. What’s more, it’s lock he’ll be invited to the pre-draft NBA Combine in Chicago, which will be held May 16-22.

Sources said Baldwin was 100 percent healthy in about a handful of games this season, but is now fully recovered.

Baldwin, who grew an inch since enrolling at Milwaukee and is now 6-foot-10, has an impressive array of skills: He handles and passes the ball extremely well for a player of his size and possesses a silky smooth jumper.

Some NBA officials are comparing him to Jayson Tatum, the Boston Celtics star, and Michael Porter Jr., the Denver Nuggets’ rising star, at similar stages in their careers.

Baldwin hasn’t formally declared for the NBA draft, which is June 23. But sources said he is fully intending on heading to the pros and is currently going through the process of selecting an agent.

Previous: LaFleur immersed in draft process
Next: Packers have more than passing interest in Arkansas’ Burks