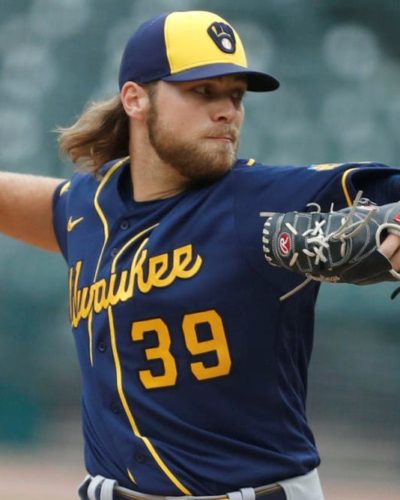 Home » Gery's Blog » Can the Brewers defy the odds and win World Series?

It would be foolhardy to say the Milwaukee Brewers couldn’t win the World Series this season.

After all, the Brewers boast an elite pitching staff that features three high-grade starters and an ace reliever.

The Brewers’ “Big Three’’ starters – Corbin Burnes, Brandon Woodruff and Freddy Peralta – are all flame-throwers who have fashioned amazing regular-season numbers. To wit:

All three of those pitchers consistently overpowered hitters as reflected in their strikeout totals. Burnes’ 234 strikeouts were the fifth most in both leagues; Woodruff’s 211 Ks were the 11th most and Peralta’s 195 strikeouts ranked 19th.

Yes, the Brewers have the pitching arsenal to win it all.

What the Brewers don’t have is hitting – at least based on regular-season numbers.

Collectively, the Brewers ranked near the bottom in all of baseball with a paltry .233 batting average. That tied them with Miami for 27th place in that category. The only teams which had lower averages were Texas at .232 and Seattle at .226.

Whether the Brewers can win the World Series with such a pathetic hitting team is questionable. History says it’s almost downright impossible.

According to the Elias Sports Bureau in New York, no team with a batting average below .235 has won the World Series in more than 50 years.

The last World Series champion to have a regular-season team batting average of .235 or lower was the Detroit Tigers, who beat the St. Louis Cardinals in seven games.

That Detroit team, in many respects, mirrors the current Brewers squad. The Tigers, as mentioned, batted .235, and had just one batter hit over .270 for the regular season, that being Willie Horton, who finished at .285.

Like the Brewers, the Tigers had terrific pitching. The Tigers’ ace was Denny McLain, who fashioned one of the most remarkable seasons in the history of the game.

So, while from a historical standpoint, the feeble-hitting Brewers have an imposing mountain to climb to win their first-ever World Series, the Tigers proved it’s still possible to attain baseball’s ultimate prize with superior pitching.

Previous: Table is set for Packers’ Gary to shine
Next: Packers will keep rolling against Bengals