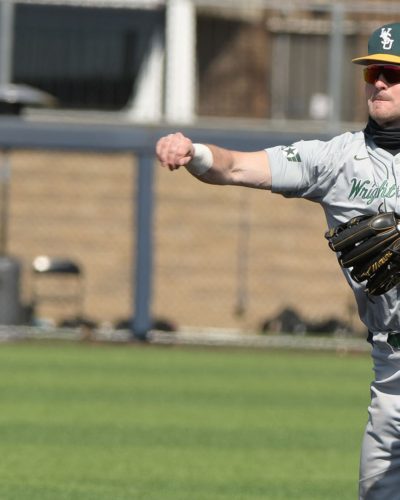 Tyler Black first visited Milwaukee as a freshman at Wright State University when the Raiders played the Milwaukee Panthers in a three-game series on April 19-20, 2019, at Henry Aaron Field in Glendale.

That trip over two years ago was Black’s only visit to the city until he traveled to Milwaukee to sign his first professional contract with the Milwaukee Brewers on July 20. The Brewers selected the Wright State infielder with the 33rd overall pick in this year’s MLB draft.

Black’s second visit to Milwaukee was one he will never forget. Besides signing his contract at American Family Field, Black also experienced the buzz surrounding the Milwaukee Bucks during their NBA championship run.

On July 20, the Bucks beat the Phoenix Suns in Game 6 to win the NBA Finals in Milwaukee.

It was a unique experience for the 21-year-old who hopes to play for the Brewers and call Milwaukee home in a few years.

“I was looking forward to playing Milwaukee in Milwaukee this year, but we didn’t play there,” Black said. “When I went there to sign my contract, I loved it. We were there the day the Bucks won, so I got to see the city go crazy. It was awesome.”

Black signed his contract nine days after the Brewers selected him on the first night of the three-day draft on July 11. On draft night, Black had a watch party with his family and friends in Toronto, Canada.

Leading up to the draft, Black knew teams in the second half of the first round had an interest in him. Black’s advisor called him at pick No. 26 and informed him that the Brewers intended on drafting him 33rd overall if he was available, Black recalls.

Black was the Brewers’ second first-round pick. They drafted Boston College outfielder Sal Frelick 15th overall before taking Black in the Competitive Balance A Round.

“It was amazing,” Black said. “You dream about that day for a long time. The way it happened was unbelievable with the ups and downs in my college career. But it really worked out. It was good to celebrate with my family and friends. Now it starts back up. It was a really special night and a dream come true.”

Black posted an impressive freshman campaign at Wright State in 2019. He notched a .348 average with 11 doubles, five triples, seven home runs and 39 RBIs in 158 at-bats in 49 games.

He didn’t duplicate that success in the pandemic-shortened season last year, however. Black put pressure on himself to live up to his freshman season while also dealing with a small labrum tear in his right shoulder, he said.

He had surgery on the injury after hitting .239 with one home run and five RBIs in 46 at-bats in 13 games last year.

Black showed tremendous plate discipline throughout his collegiate career. He recorded 84 walks compared to 52 strikeouts in 500 plate appearances in 113 games.

“One word I have used to describe my time at Wright State is growth,” Black said. “(Coach) Alex Sogard and the staff there have just done a great job with everybody and everything. I came in as an immature high school kid, and I left there after so much growth on the field and most importantly off the field.”

The 6-foot-2, 190-pound left-handed hitter has an advanced approach at the plate with above-average power and a strong feel for the strike zone. He also has respectable speed and notable instincts on the bases.

Defensively, Black is athletic and possesses quality hands and solid arm strength. He split time between second base and third base at Wright State after playing shortstop in high school. He profiles best as an offensive-minded second baseman in pro ball.

Besides his on-the-field skills, scouts rave about Black’s makeup, describing him as a team-first player with a strong work ethic.

Black reported to the Brewers’ complex in Maryvale, Arizona, shortly after signing his contract. He has spent his time in Arizona preparing for his first assignment in the Brewers organization.