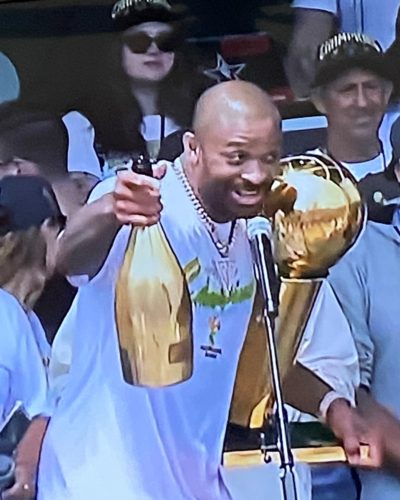 The Milwaukee Bucks want to keep their core group intact.

With NBA free agency negotiations set to start 5 p.m., the Bucks are hoping to convince their two key free agents that staying in Milwaukee would be in their best interests.

The Bucks obviously want to retain P.J. Tucker, who gave them a big boost in the playoffs with his tenacious defense, and Bobby Portis, who played well off the bench from the first game of the regular season until the team’s championship victory over the Phoenix Suns.

It appears the Bucks have a strong shot at keeping Tucker. He reportedly wants a multi-year deal for at least $8 million. According to league sources, the Bucks will be offering him a two-year, $20 million contract.

“I can’t imagine any team giving him more than the Bucks will,’’ an NBA executive said Sunday. “Most teams wouldn’t even give him that much. He’s a good defender and that’s it. No offense. And he’s near the end of the road. He’s what? Thirty six?

“I’d be very surprised if he left Milwaukee.’’

On the flip side, it wouldn’t be surprising to see Portis bolt. And that would be a major loss for the Bucks. Portis is 26 and theoretically entering the prime of his career.

Portis, who became a huge fan favorite in his first season with the Bucks, will undoubtedly draw keen interest from several teams. The most the Bucks could pay him is $5.9M, while several NBA officials said Portis could double that amount with another team.

“He’s looking for a lot of money,’’ another NBA official said. “I heard he wants north of $15 million. That’s crazy. I don’t think he’s going to get that, but he could get a lot more than the Bucks can give him.’’

A rumor making the rounds in recent days has Portis leaving the Bucks, with the Bucks then signing Jeff Green, who is an unrestricted free agent.

Green is coming off a nice season with the Brooklyn Nets. He played in all but four of the team’s 72 regular-season games, averaging 11 points and 3.9 boards.

Green was also solid in the playoffs and, interestingly, had his finest hour in Game 5 against the Bucks in the semifinals. That’s when Green scored 27 points as he connected on seven of eight 3-pointers.

Several teams are expected to pursue the 34-year-old Green, including Miami and Boston. The scuttlebutt is he would prefer to play for Miami, where he has a home.

According to a source, if Portis decides to give the Bucks a hometown discount and stay in Milwaukee, the chances of Green signing with the Bucks is “zero.’’

Sources said that’s about to occur with the Heat expected to acquire two big-time guards in DeMar DeRozan and Kyle Lowry. Their additions, along with the return of Jimmy Butler and Bam Adebayo, figure to put the Heat back in title contention next season.

“Why did they do that?’’ an NBA executive said. “M-o-n-e-y. They (Bucks officials) won’t admit it, but they didn’t want to pay guaranteed money for that pick (No. 31). It’s common practice these days to guarantee top 40 picks.’’

Previous: Bucks may face tough decision on top draft pick
Next: Brewers come away with a winner in Tyler Black