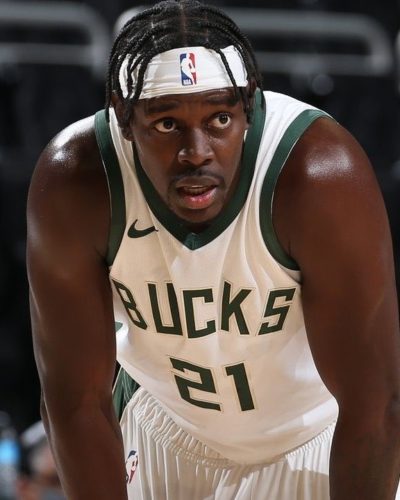 Some news and views on the Bucks:

Jrue Holiday will have more than a championship ring coming his way in the near future.

The Bucks veteran guard will also be receiving a nice bonus check.

Holiday, who was paid $25.87 million this season, has a clause in his contract that will garner him an additional $1.05M for winning the championship.

Holiday is the only Bucks players to have any championship incentive clause.

Shortly after the Bucks won the championship, Giannis Antetokounmpo took a quick stroll down memory lane.

The Bucks precocious star wished he could go back in time and lamented how he would have liked to have been Rookie of the Year. It’s the one of the few major awards not on the two-time Most Valuable Player’s resume, one that also includes the Finals MVP, the Defensive Player of the Year, the Most Improved Player and All-Star Game MVP

But they weren’t good enough to land him on the All-Rookie first team, which consisted of Michael Carter-Williams, Victor Oladipo, Trey Burke, Mason Plumlee and Tim Hardaway Jr.

While Antetokounmpo, a second-team selection, would have understandably liked being on the first team and been the Rookie of the Year, he shouldn’t feel too badly. After all, several other great players never made the first team, either.

If anyone should be given a championship ring, it’s John Hammond.

Hammond is arguably the principal reason the Bucks just won their second NBA title and first in 50 years.

Without Antetokounmpo and Middleton – the team’s two best players — the Bucks wouldn’t be where they are today on top of the NBA world.

Show me the money

As I wrote a few weeks ago, Bucks supersub Bobby Portis is on the brink of getting a hefty pay raise this summer.

Portis has a player-option clause in his contract and will certainly exercise it. Portis, who enhanced his free agent stock after coming up big in several playoff games, was paid $3.2M this season and would get a miniscule bump to $3.8M next season if he opted-in.

But several NBA officials contend the 26-year-old Portis could, at the minimum, double his salary next season. One NBA executive said Portis could possibly triple it.

“In our team evaluations, we have him as a $12 million player,’’ the executive said. “He had a very good (regular) season and he was really good in the playoffs. He’s going to get paid.’’

Doing their due diligence

The NBA draft is Thursday and the Bucks, like the other 29 NBA teams, have been working out prospects.

The Bucks don’t have a first-round pick (shocking, eh?), but they do have the first pick in the second round: No. 31 overall.

The Bucks have checked out a spate of players who could not only be taken in the late-first, early-second round range, but players who could be picked late in the second round like Iowa’s Luke Garza and Pepperdine’s Kessler Edwards to potential free-agents like Georgetown’s Jamorko Pickett.

One of the most interesting players to work out for the Bucks was Giorgi Bezhanishvili, a 6-9 forward from Illinois.

Bezhanishvili averaged a ho-hum 5.1 points and 2.7 rebounds while serving as a backup Kofi Cockburn last season. In his sophomore year, he averaged 6.8 points and 4.8 boards.

It’s what Bezhanishvili did in his freshmen season that intrigues NBA scouts. Bezhanishvili looked like a star in the making. He averaged 12.5 points and 5.2 rebounds in starting all 33 games. What’s more, he had a 35-point game against Rutgers – an Illini freshman record.

Bezhanishvili, who hails from Georgia, the same country that produced  former Bucks center Zaza Pachulia, has unquestionably the best footwork in this draft class. As a child, he played soccer and took dance lessons for six years. He has mastered the rumba, salsa, samba, jive, cha cha, tango, English waltz, slow waltz and foxtrot.

If anyone had told you eight years ago that Antetokounmpo would develop into one of the league’s elite players, you would have just laughed.

Nobody, and I mean nobody, saw this coming after the Bucks made him the 15th overall selection in the 2013 draft.

I remember early in Antetokounmpo’s pro career, I asked one of his veteran teammates how good the young man from Greece could be and for a player comparison.

At the time, it wasn’t an outrageous comparison. Kirilenko was long, mobile and possessed a good all-around game. He played 13 years in the NBA, mostly with Utah, and was chosen to the 2004 All-Star Game.

During the Bucks’ championship run, It seemed the media interviewed everyone who had a scintilla of a connection to the Bucks organization – everyone that is except for John Steinmiller.

Steinmiller is one of the most important figures in Bucks history. He started working for the team in 1970 and ever since invested his heart and soul into the organization. I can safely say the Bucks have never had a more dedicated and more loyal employee than him. Yet, during the playoffs and championship celebration, the Bucks brass inexplicably refused to recognize Steinmiller’s immense contributions.

The Bucks owners should have made the same acknowledgement for John Steinmiller.

Previous: Brewers may have gotten a steal with second-round pick, Tyler Black
Next: NBA official on Jalen Johnson: “biggest wild-card in the draft”