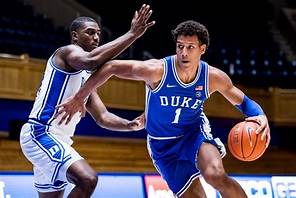 It should be comforting for Jalen Johnson to know he’ll be a first-round selection in Thursday night’s NBA draft.

What should be more stressful for the former Nicolet High School standout is where he’ll actually be chosen.

Johnson, a talented 6-foot-9 forward, has elicited a wide-range of opinions from NBA draft personnel.

Indeed, Johnson is perhaps the most polarizing player in the draft. Nobody questions his skillset but they question his stability and decision-making.

NBA officials are most concerned about Johnson’s penchant for not staying in one place. He began his high school career in Sun Prairie before switching to Nicolet, which is located in Glendale, a suburb of Milwaukee. He then switched to IMG Academy in Bradenton, Fla. before returning to Nicolet.

Then, after being a five-star recruit, he ended up at Duke. But Johnson didn’t stay there long, either. He played a mere 13 games for the Blue Devils before quitting to focus on the 2021 draft.

In his brief stint at Duke, Johnson gave glimpses of his big-time talent. In his collegiate debut against Coppin State, Johnson had 19 points, 19 rebounds and four blocked shots. In a game against Georgia Tech, Johnson scored 18 points and grabbed six rebounds.

He finished his truncated season at Duke averaging 11.2 points, 6.2 rebounds and 2.2 assists. He shot 52 percent from the field and 44 percent from 3-point range.

Now, NBA personnel are debating whether to invest a high pick because of Johnson’s huge upside, or pass on him because of his alleged instability.

“I like him; he’s very talented,’’ a veteran NBA executive, whose team is picking in the lower third of the first round, said of Johnson. “He could go before us, and he could go after us.

“It just shows you how he’s all over the draft map.’’

When asked to provide a capsule scouting report on the 19-year-old Johnson, a general manager said: “He is a really skilled forward. He has good athleticism and he can really pass for a player of his size.

“Defensively, he’s not a rim protector or great one-on-one defender, which is OK. He can become a good team defender. His perimeter shooting needs to improve. And he needs to be a more consistent rebounder.’’

If Johnson is selected in the lottery, it would mark the third straight year a Wisconsin product had been one of the top 14 picks.

Last year, Tyrese Haliburton, who played at Oshkosh North High School, was taken with the 12th overall pick by the Sacramento Kings. The 6-foot-5 guard had an excellent season, averaging 13 points and 5.3 assists, and was chosen to the NBA’s All-Rookie first team.

In the 2019 draft, Tyler Herro, who played at Whitnall High School in Greenfield, was selected with the 13th overall selection by the Miami Heat. He was chosen to the All-Rookie second team.

Bucks have plethora of options

The Bucks have only one draft pick – as of now – that being the first pick in the second round, the 31st pick overall.

By then, all the impact rookies figure to be long gone but the Bucks could still land an intriguing prospect who could help them down the road.

The Bucks have had nice success with their second-round picks, with Michael Redd being the prime example. Malcolm Brogden was also a second-round choice. Bucks star Khris Middleton was a second-round pick as well, albeit he was drafted by Detroit before being dealt to Milwaukee.

“Where the Bucks are picking isn’t all that bad,’’ an NBA scouting director said. “They could get a good developmental player there. I think there’s a consensus among us that there isn’t much difference in the players who’ll be taken at 20 or taken at 40.’’

There is speculation the Bucks may opt for a guard, and there should be a spate of them available in the late-first to early-second round area. Among them are Miles McBride of West Virginia, Joshua Primo of Alabama, Quentin Grimes of Houston, Nah’Shon Hyland of Virginia Commonwealth, Sharife Cooper of Auburn, Brandon Boston Jr. of Kentucky, Joel Ayayi of Gonzaga, Tre Mann of Florida, Ayo Dosunmu of Illinois and Josh Christopher of Arizona State

A source said the Bucks have more than a passing interest in guard Jared Butler, who helped Baylor win this year’s NCAA Championship. But the Bucks would likely have to move up to land Butler, who was recently cleared to play by the NBA after a heart issue. Some NBA officials project Butler, who has an excellent all-around game similar to Malcolm Brogdon, being chosen around pick 20.

Some other draftees who could be on the board when the Bucks pick are forwards Usman Garuba of Spain, forward Isaiah Todd, who played in the G-League, center Charles Bassey of Western Kentucky, power forward Jeremiah Robinson-Earl of Villanova, forward Kessler Edwards of Pepperdine, power forward/center JT Thor of Auburn and Iowa swingman Joe Wieskamp of Iowa.

Wieskamp certainly fits the Bucks’ profile. He can play multiple positions and, more importantly, he can shoot the 3-ball. He shot a blistering 46 percent from beyond the arc last season and 41 percent in his three seasons with the Hawkeyes.

The Bucks recently brought him to Milwaukee for a workout.

Antetokounmpo has worked out for three teams: San Antonio, Houston and Indiana.