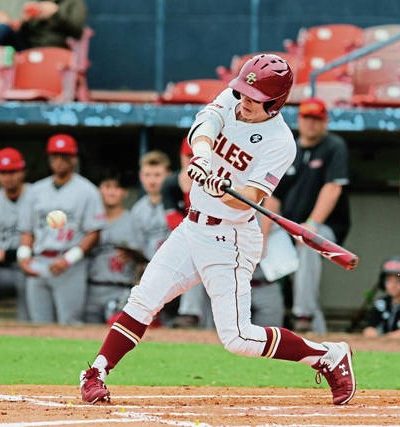 The Brewers seem to prefer college performers in the MLB draft. A year after using all five of their selections on college players, the Brewers started Sunday’s draft by selecting a college player with each of their first two picks.

Frelick (pictured above) is a left-handed hitter who has a simple load and quick hands. He profiles as a top-of-the-order hitter due to his strong plate disciple and ability to hit for average and power.

He also is athletic and possesses solid speed, which he uses to impact the game on the base pads and defensively in the outfield.

Frelick has played in the outfield during his time at Boston College after being an infielder in high school. He has adjusted well to the outfield and has gained some experience playing on the dirt during college. Last summer, he spent time at second base, shortstop and third base.

Although some scouts feel Frelick is better suited as second baseman, the Brewers believe he can stick in center field, according to sources.

With their second first-round pick on Day 1, the Brewers used their Competitive Balance Round A pick on Black.

Black is a 6-foot-2, 190-pound left-handed hitter. He has an advanced approach at the plate with above-average power and a strong feel for the strike zone. Black also has respectable speed that will allow him to record double-digit steals in a pro season.

Defensively, Black has split time between second base and third base during his collegiate career. He was a shortstop growing up and is comfortable playing all three infield positions. Scouts believe he profiles best as an offensive-minded second basemen.

On Monday, the draft continues with the second through 10th rounds. The Brewers hold the 15th pick in the second round, which is officially the 51st overall selection. Miami catcher Adrian Del Castillo, Arkansas center fielder Christian Franklin, Boston College shortstop Cody Morissette and Ole Miss left-handed pitcher Doug Nikhazy could be options for the Brewers in the second round.

Previous: Wisconsin produces another bumper crop of MLB draft prospects
Next: Brewers may have gotten a steal with second-round pick, Tyler Black