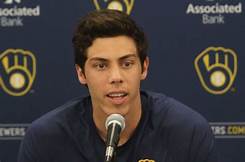 The Milwaukee Brewers open the 2021 season against the Minnesota Twins on Thursday. It’s the start of a 162-game regular-season that will consist of the Brewers vying for their fourth consecutive postseason berth.

If the Brewers want to accomplish that task, they will need bounce-back performances from outfielder Christian Yelich and all the other hitters scattered throughout their lineup that struggled last season.

Keston Hiura, who will move from second base to first base this season, looked lost at the plate in his second major-league season. He posted a .212 batting average with an NL-high 85 strikeouts last year.

Outfielder Avisail Garcia and catcher Omar Narvaez were newcomers last season and fell way short of expectations. They will need to return to form while outfielder Lorenzo Cain, the team’s highest-paid player, has to prove he can contribute after sitting out last season.

The offense is the biggest question mark entering this season. Its performance will dictate the Brewers’ success in 2021. The offseason acquisitions of second baseman Kolten Wong and outfielder Jackie Bradley Jr. should positively impact the offense while also strengthening the defense.

The Brewers also have the best pitching staff in the National League Central. They boast an impressive one-two punch in their starting rotation with right-handers Brandon Woodruff and Corbin Burnes. Left-hander Josh Hader and righty Devin Williams are two of the game’s best relievers and should serve as shutdown late-inning options.

Right-handed pitcher Freddy Peralta is a wildcard. The 24-year-old pitched out of the bullpen last year but will start this season in the rotation. He has the intangibles to thrive as a major-league starter. If Peralta can consistently mix in his slider and changeup, instead of simply relying on his fastball and curveball, he could be just as good as Woodruff and Burnes.

The Brewers are slightly underrated entering this season. Although the St. Louis Cardinals and Chicago Cubs have talent, they are nowhere near as deep as the Brewers. Expect the Brewers to win 87 games and capture the NL Central crown this season.