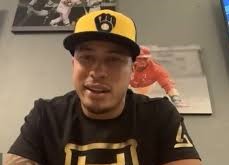 Home » Guest Post » Is an All-Star Game appearance this summer in the cards for Wong or Bradley?

The two biggest additions the Brewers made to their roster this season were free agent acquisitions Kolton Wong and Jackie Bradley, Jr. Both are expected to play major roles when the Brew Crew takes the field in 2021. Both are former Gold Glovers and will hopefully add offense to the team’s lackluster offensive output in 2020.

Is it possible that Bradley and Wong, or one or the other, could represent the Brewers in the All-Star Game this season in their first year with the Brewers? Bradley, who was a mainstay for the Boston Red Sox for eight seasons in their outfield, was an American League All-Star in 2016.  Wong, who played for the Cardinals for eight seasons, has never made the All-Star team, but he may be one of those players who is on the verge of becoming an All-Star.

Let’s take a quick look at the players who made the All-Star team in their first season with the Brewers.

1975: Hank Aaron…  Aaron returned to Milwaukee to play for the Brewers after a lengthy career with the Braves. He was traded to the Brew Crew in a November, 1974 swap and was an American League all-star selection in ’75. He eventually retired after the 1976 campaign.

1978: Larry Hisle… Hisle came to the Brewers as a free agent and had his best season with the Brewers (of the five he played in Milwaukee). The ASG selection that year was the second of his career.

1981: Ted Simmons… This was the first of two ASG appearances with the Brewers for Simmons, who came to the team in a trade with the Cardinals.

1981: Rollie Fingers… Also a part of the trade with the Cardinals that brought Simmons to Milwaukee, Fingers in 1981 had a career season with the Brewers winning the league Cy Young and MVP.

1984: Jim Sundberg… Simdberg came to the Brewers in a trade with Texas and made the All-Star team in his one and only season with the Crew. He was traded the following year to the Kansas City Royals.

1990: Dave Parker… “The Cobra” was another “one and done” player with the Brewers, but he had 21 HRs and 92 RBI as the team’s DH and was a Brewers ASG selection that year. That ASG was the last of the seven in his career. He was traded to the Angels for the ’91 season.

2001: Ben Sheets… Sheets is the only Brewers rookie to make an all-star team. The 2001 ASG was the first of his four ASG appearances.

2005: Carlos Lee… Lee came to Brewers from the White Sox in a trade and hit 32 HRs and had 114 RBI. The ASG selection that season with the first of his three ASG appearances.

2009: Trevor Hoffman… After a long, storied career with the Padres, Hoffman ended up with the Brewers in ’09 via the free agency route. He made the ASG that first year with the Brew Crew and then retired after the 2010 season.

2018: Christian Yelich… 2018 was a dream season for Yelich; his first ASG selection and then a National League MVP Award. The Brewers got Yelich in a trade with the Miami Marlins.

Previous: NBA scouts still think highly of Jalen Johnson
Next: Brewers have had a galaxy of stars