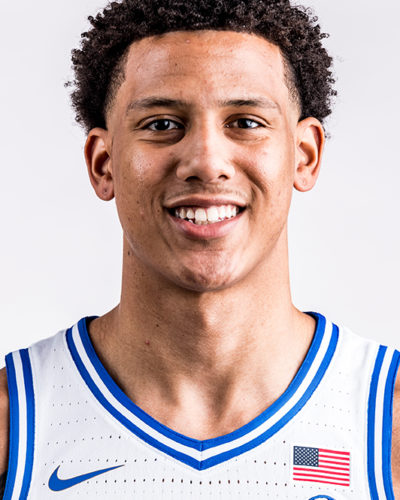 Jalen Johnson’s decision to opt out of the remainder of the season for Duke is undoubtedly going to come back and haunt him on NBA draft night.

However, Johnson’s draft stock isn’t expected to take the precipitous hit that some observers might believe.

According to two NBA talent evaluators, Johnson, a talented 6-foot-9 forward, is still is expected to be a fairly high draft selection.

Johnson, who was a five-star prep recruit from Wisconsin, surprised the basketball community last month by announcing his departure from Duke with just six regular-season games remaining.

Johnson had lived up to his considerable hype in the Blue Devils’ season opener when he recorded 19 points, 19 rebounds and four blocked shots in Duke’s 81-71 victory over Coppin State on Nov. 25.

But it was pretty much downhill from there as he struggled with consistency and a foot injury. Johnson wound up playing 13 games – of which eight were starts — and averaged 11.2 points and 6.1 rebounds.

A longtime NBA exec is convinced Johnson will go in the upper half of the draft.

“Johnson is still going to be in the lottery,’’ the exec said. “At the start of the season (at Duke), we had him as a top six pick. He isn’t going that high now but he’ll still be in the eight to 14 range.’’

A veteran NBA scout agreed, contending Johnson stands a good chance to be a lottery selection.

“That definitely hurt him,’’ the scout said, referring to Johnson’s decision to leave Duke before the season ended. “I don’t think he’s a top 10 guy after what he did, but I see him in the mid-first round area.’’

The prospects of the Minnesota Timberwolves, Houston Rockets, Detroit Pistons and some of the bottom of the basement NBA teams making the playoffs aren’t looking good.

But the prospects of them getting a potential star in the draft is reasonably good.

That’s because this year’s draft is loaded at the top. Unlike many years when there were maybe two or three bona fide star prospects, this draft class has at least five.

That’s according to a player personnel director, who has more than two decades of drafting on his resume. Those five players are center/power forward Evan Mobley of Southern California, guard Cade Cunningham of Oklahoma State, point guard Jalen Suggs of Gonzaga, forward Jonathan Kuminga and shooting guard Jalen Green, the latter two teammates for the G-League Elite team.

“They all could all be stars,’’ the player personnel director said. “To me, there isn’t a clear-cut No. 1 guy. They’re all at the same talent level. It depends on your needs.’’

Here are some – repeat some — of the teams courting them:

Bill Russell being among the 4 finalists for the Naismith Hall of Fame raised a few eyebrows.

Russell is undeniably one of the greatest players ever and was duly recognized for his achievements by being inducted into the Hall in 1975.

But his coaching resume is hardly hall of fame material.

Russell coached the Celtics for three seasons from 1966-69 and posted a 162-83 record. Impressive.

But then Russell coached Seattle for four seasons, posting a 162-166 record.

And then he coached Sacramento for one season, going 17-41.

The bottom line: in eight seasons as a head coach, Russell’s record was 341-290. Not impressive.

Another coach on the Hall of Fame finalist list is Rick Adelman, who unquestionably deserves to be inducted. After all, Adelman-coached teams won 1,042 games – the ninth most all time.

One coach who was conspicuous by his absence as a finalist was George Karl. He won even more games than Adelman. Karl won 1,175 games – the sixth-)most in NBA history. What’s more, Karl never coached a team that finished under .500 from 1991 until 2013 – a remarkable 21 season stretch.

That’s quite a feat when you consider Phil Jackson had a 20-year stretch and Pat Riley had a 19-year run of .500 or better seasons. Gregg Popovich was at least .500 or better for 22 straight seasons before seeing his streak come to a halt last season when the Spurs went 32-39.

Despite all that firepower, the Lakers lost to the Knicks in the Finals.

Previous: It’s been a revolving door at first and third base for Brewers
Next: Is an All-Star Game appearance this summer in the cards for Wong or Bradley?