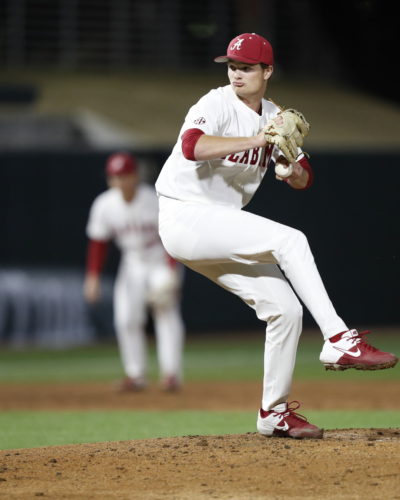 Connor Prielipp received interest from professional scouts throughout his senior season at Tomah High in Wisconsin in 2019.

While the left-handed pitcher had the potential and attributes major-league teams sought, scouts believed his best option was to attend the University of Alabama for three years and reenter the MLB draft in 2022.

Very few people anticipated Prielipp to be nearly unhittable his freshman season at Alabama, however. His sensational performance in a pandemic-shortened season has major-league teams buzzing. It also has put him in a unique situation as he enters his second season.

Major league teams consider Prielipp as one of the top pitchers in college baseball and the potential No. 1 overall pick in the 2022 MLB draft.

Prielipp will try to live up to those expectations when he makes his second consecutive opening day start on Friday. He will toe the rubber against McNeese State at 3 p.m. Friday at Sewell-Thomas Stadium in Tuscaloosa, Alabama.

“Connor got off to a great start last year as a freshman and has separated himself from the pack,” Alabama coach Brad Bohannon said. “I don’t have any doubt that he will give us a great start on Friday and give us a chance to win.”

His success in the limited sample size caused his status as a pro prospect to increase significantly. It also has resulted in numerous preseason accolades, including first-team All-American honors by multiple publications.

“Personally, I try not to look at that stuff too much because I really haven’t done that much yet,” Prielipp said. “I’m just really looking forward to proving it through a whole season this year.”

Prielipp has made strides throughout his first 1½ years at Alabama. He added 25 pounds to his frame and worked on a changeup in the offseason.

This season, Prielipp will add the changeup to his current repertoire of pitches. He also throws a mid-90s fastball, high-spin curveball and slider. He hopes the changeup will help him build off his freshman season and serve as another option against Southeastern Conference hitters.

“Connor has improved tremendously,” Bohannon said. “He was going to hit some rough patches in league play. He had an amazing start, but it’s just not typical to start a freshman opening day on a Friday night. He’s commanding the ball a lot better. His misses are smaller. He’s just really becoming more consistent.”

Previous: Bucks’ attendance request is irresponsible
Next: Antetokounmpo’s ‘Mean Mug’ wouldn’t fly back in the day