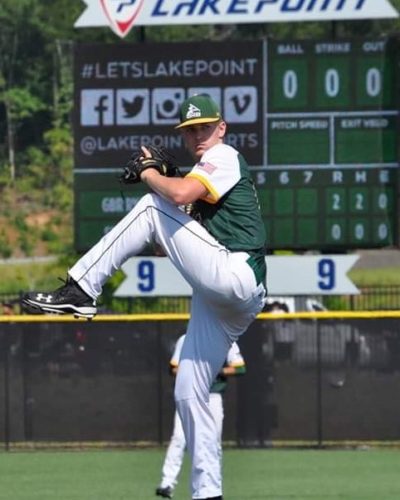 Tyler Chadwick didn’t always have a strong passion for pitching. He was an all-conference catcher as a freshman at Marshall High School in 2017. He pitched occasionally as a freshman but “couldn’t throw strikes to save his life,” he admitted.

It wasn’t until he joined GRB Academy in Windsor, WI, as a sophomore that he started to have a passion for pitching and experienced better results on the mound.

In his three years at GRB Academy, Chadwick has refined his skills and turned into a pitcher, compared to simply being just a thrower. His transformation has allowed him to develop into one of the country’s top prep right-handed pitchers.

“They really turned me into a pitcher because of my arm strength,” Chadwick said. “I just kept improving and learned to like pitching.”

Chadwick, a 6-foot-6, 210-pound right-hander, has drastically improved his status as a prep pitcher over the last two years. He committed to West Virginia University about a month before his junior year in August 2018 and is squarely in the middle of this year’s MLB draft attention.

Professional scouts project Chadwick as a possible draft pick in this year’s draft, depending on the length of the draft. In a typical 40-round draft, Chadwick likely would be selected somewhere between the fourth round to seventh round.

But with the draft potentially only being five rounds this year and Chadwick being a prep right-handed pitcher – the riskiest demographic in the draft each year – his draft chances are slightly unknown. He also only pitched two innings this spring in a Perfect Game Iowa spring league due to the coronavirus pandemic.

Regardless of if he is drafted this summer or not, Chadwick appreciates the opportunity to go through the draft process.

“It’s mind-blowing,” said Chadwick on the draft attention. “It’s never something I thought about. Growing up and playing baseball, I just loved the sport and didn’t think anything of it. I kept gaining a love for the sport. When colleges came around that was just crazy. And now with pro teams coming to my house, I’m insanely grateful for it.”

Chadwick has impressive raw tools that give him plenty of potential moving forward. He has a four-pitch mix, featuring a four-seam fastball, two-seamer, slider and changeup. He throws with little effort from a high three-quarters arm slot and is known for his fastball that reaches 96 mph.

Chadwick has the size and big-time fastball scouts seek in a prep pitcher. He also has flashed solid potential with his three off-speed pitches.

“My arm strength,” said Chadwick on his biggest strength. “Guys have kind of called me a workhorse in the past because my coaches can throw me out there whenever they need me to pitch, and they know I can do the job for them.”

With Chadwick’s senior season cut short due to the coronavirus, he has thrown bullpens off the regulation mound he and his father built at their family’s farm. He throws three or four times a week and pitches off a mound twice a week, he said.

Besides refining his skills, Chadwick also wants to add additional strength to his frame in anticipation of his next step in his baseball career, whether that’s the pro ranks or West Virginia.

“My main focus right now is I want to get stronger,” Chadwick said. “I got sick for a while before this coronavirus happened. I had the flu bad and lost like 15 points, so I am trying to gain some muscle back. I want to come out and look like a whole different person. I also want to work on my command and make my off-speed pitches better.”

West Virginia was the first program to offer Chadwick an opportunity to play at the collegiate level. The program’s early confidence in him was a major factor in his commitment, he said.

He also met right-handed pitcher Alek Manoah on his recruiting visit and followed him throughout his time at West Virginia. Manoah went undrafted out of high school but developed his skill and was selected 11th overall in last year’s draft. West Virginia’s development of Manoah, who is a 6-6, 260-pound righty, also intrigued Chadwick.

Chadwick understands he’s in a win-win situation when it comes to the next step in his baseball career. If he doesn’t turn pro this summer, West Virginia expects Chadwick to make an immediate impact as a freshman next spring. He would be draft-eligible again in 2023.

In recent years, Wisconsin has produced quality prep talent, including two first-round picks in the draft. The Los Angeles Dodgers selected Gavin Lux with the 20th overall pick in 2016, and the New York Mets drafted Jarred Kelenic sixth overall in 2018.

Seeing Lux and Kelenic develop into top draft prospects has driven Chadwick to try to follow in their footsteps, he said.

“It shows me what things can be when you work hard,” Chadwick said. “It’s something exciting to look forward to. Just seeing those guys blow up like that … it is a dream almost to see people like that do that and kind of be able to follow in their footsteps.”

Previous: Who was the best one-and-one player in Bucks’ history?
Next: After age 26, production of NFL running backs noticeably declines