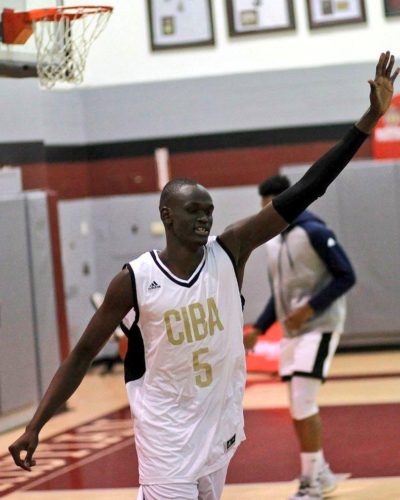 Thon Maker might not be the only member of his family playing in the NBA next season.

Maker, the Milwaukee Bucks’ young big man, has a younger brother, Matur, who will be eligible for the June NBA draft. The 6-foot-10 Matur, who is an inch shorter than Thon, is a multi-positional player who excelled for Mississauga Prep in Ontario, Canada.

While Thon is admittedly biased about his brother’s skills, he’s convinced Matur has what it takes to play at the game’s highest level.

“He does a lot of things well at both ends of the floor,’’ Thon said. “Offensively, he handles the ball well; he’s a playmaker. When I say playmaker, I don’t mean like he just passes first or passes only. He makes the right play every single time. He’s very unselfish.

“He attacks first and then shoots later. He can really shoot the ball, but he wants to dunk everything. He’s very aggressive.”

“Defensively, when we played together, he was our guy who we put against the other team’s best payer every single game because he’s got quick feet, length and he’s got a quick jump,’’ Thon said. “If you think he’s beat, he’s not beat. It’s kind of kind of like when you see Giannis, Say somebody drives on Giannis, right? Giannis is going to chase him down and block his shot. He’s kind of like that: fast twitch muscles.’’

“He’s more like Jamal Crawford, or a K.D. (Kevin Durant) type of guy,’’ Thon said of Matur, who is now training in Atlanta in preparation for the draft. “They got similar builds, same movements, very quick off their feet.

“And he plays hard; he plays really hard at both ends of the court. He’s tough. One time we were playing a game, he got fouled really hard. The fans didn’t even think he was going to come back and play but somehow he came back and played.’’

Thon, who believes Matur’s best position in the pros will be at the small forward spot, was the 10th overall selection in the 2016 draft. Thon doesn’t expect Matur to be a Lottery selection like himself, but believes Matur will be a high pick, especially considering Matur has fared nicely against some of the best young players in the NBA.

“I believe he’ll go first round; he’s that good,’’ Thon said of Matur, who averaged 25.7 points, 14.5 rebounds, 3.5 assists and 2.8 blocked shots a game last season. “Also, most of these guys coming out are in his class or my class. He’s played against both and he’s done great work against them.

The Bucks aren’t likely to have a first-round pick, having dealt it to the Phoenix Suns (the Suns get the pick if the Bucks finish anywhere between 11 and 16) as part of the Eric Bledsoe-Greg Monroe deal.

But Thon said he’d be nothing less than ecstatic if the Bucks somehow could draft him.

“I love playing with him, not against him,’’ Thon said smiling. “Man, that would be awesome.’’