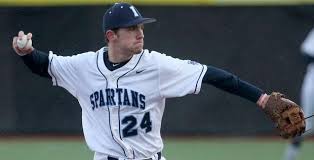 Sitting in a chair at Immortal Ink in New Jersey on June 13, as a tattoo artist etched a bald eagle with an American flag into his left chest, Nick Egnatuk waited patiently. Eager for his tattoo, which he had planned for months, Egnatuk was also awaiting a call he had dreamed about since he was a youngster.

A senior at Immaculata High School in Somerville, N.J., Egnatuk was a well-regarded prospect for the 2017 MLB First-Year Player Draft. With Day 2 of the draft underway on June 13, Egnatuk hoped to hear his name called sooner rather than later, as he sat in the tattoo parlor.

With the fifth-round of the draft underway, Egnatuk received a call from his advisor, Joe Gaza, who informed him that the Milwaukee Brewers might select him with the 144th overall pick.

Sure enough, when the Brewers’ pick came up, Egnatuk’s dream became a reality, as they made him their fifth round selection.

Committed to the University of Pittsburgh, the prep third baseman accepted the Brewers’ signing bonus offer of $500,000, jumping straight into professional baseball out of high school. The suggested slot value for the 144th overall pick was $349,900.

“It wasn’t a hard decision to make,” said Egnatuk about deciding between Pitt and pro ball. “I’ve always wanted to play professional baseball all my life. When the dollar value came in, my family and I decided that no doubt. I took it right away and didn’t think twice about it.”

Egnatuk worked out for four teams, including the Brewers. He wasn’t surprised when the Brewers called his name in the fifth round, as he has a relationship with multiple front office executives.

“I’ve been pretty close with Mike Serbalik,” Egnatuk said. “Last year he was (the Brewers) area scout, and I got close with him. He moved up to regional supervisor this year. He’s the one who called me on draft day.”

Ranked as the 36th-best prospect in this year’s draft class by Baseball America, Egnatuk hit .265 (22-for-83) with three doubles, three triples, one home run in 26 games as a senior this year.

“It was tough for me because there was so many scouts at each game,” Egnatuk said. “It was like, everyone is here, so I have to perform. I was pressing too much.”

Although his senior numbers don’t jump off the page, Egnatuk hits the ball with authority from the right side of the plate due to his outstanding swing and bat speed. A 6-foot-2, 185-pound infielder, Egnatuk also has above-average speed.

Assigned to the Arizona League Brewers – the Rookie affiliate of the Brewers, Egnatuk is hitting .286 (2-for-7) with one RBI and three walks in two games.

With his professional career underway, he’s eager to pursue his dream of playing in the major leagues.

“The first day was pretty rough,” said Egnatuk about starting his pro career. “I flew in (to Arizona) from Milwaukee and my parents dropped me off at the facility. I walked in and was clueless. I didn’t know what to do. The guys are great.

“It’s been a lot of work. Definitely different. A lot of nights and days at practice and games. It’s a grind, but it’s awesome. I love it.”

Previous: ‘The Jet’ looking to book a return flight to Milwaukee
Next: Horst didn’t do himself any favors