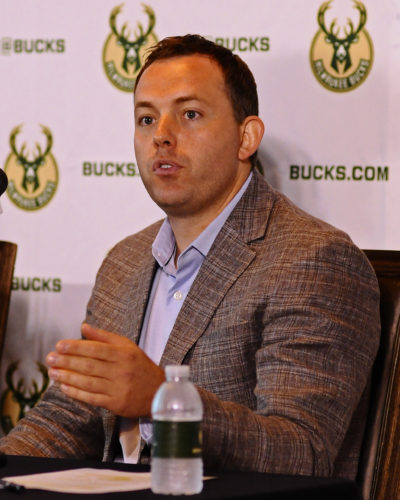 Home » Gery's Blog » Horst didn’t do himself any favors

It was the day after Jon Horst was shockingly named the Milwaukee Bucks new general manager when I received a call from an NBA official.

It didn’t take him long to cut to the chase.

“Who is Jon Horst?’’ the official asked sincerely and not sarcastically. “I don’t know him. I googled him but didn’t find much. What can you tell me?’’

I gave him a few of my thoughts, saying how Horst was an incredibly loyal soldier to his predecessor John Hammond during the 12 years he worked for him in Milwaukee and Detroit.

And I told him how Horst was a rather low-key guy who quietly and  conscientiously goes about his business. In general, a decent guy.

The official then mentioned how he had watched some of the Horst press conference before adding, “He may be all of those nice things you said about him, but why would he say he was involved in every major decision the organization has made in the last nine years? It’s not like the Bucks have done anything; they haven’t done squat.’’

Fair enough. In the last nine years, the Bucks have been mediocre, at best. And that might be charitable. In that nine-year span with Hammond at the helm and Horst working with him, the Bucks had two – repeat, two – winning seasons. In those nine years, they made the playoffs three times. They didn’t advance out of the first round once.

The Bucks have the dubious distinction of having the longest streak of not getting out the first round in the NBA. For the record, they haven’t been second-round playoff participants since 2001 when the George Karl-led team advanced to the Eastern Conference Finals before getting hosed by the NBA, which upgraded a foul on Scott Williams in Game 6 to force him to sit out Game 7. (A side note: Don’t ever engage Williams or anyone else associated with that team into talking about that fiasco because it could get real ugly.)

But let’s digress and discuss the current Bucks team, the one Horst has allegedly been put in charge of –even though most NBA officials and myself firmly believe Jason Kidd is calling the shots with the latest example being the selection of Kidd-favorite D.J. Wilson in the recent draft.

Horst and/or Kidd now have the daunting task of transforming the Bucks from pretenders to contenders. Yes, the Bucks have Giannis Antetokounmpo, a potential superstar, as a foundational piece. But who else?

Jabari Parker is rehabbing from his second ACL surgery and, while you hope and pray that this good, young man who looked like he was on his way to being a big-time performer fully recovers, there aren’t any guarantees.

Khris Middleton, who appeared to be a rising star two seasons ago, looked rather ordinary in last season’s playoffs, and Thon Maker possesses intriguing potential with the operative word being potential.

And that’s about it.

There are unequivocally more questions surrounding the Bucks than answers and, if they are ever to move into the league’s penthouse district, they’re going to have to acquire at least one more bona-fide star.

For that to happen, Horst and the Bucks will need the basketball gods to look down on them. The Bucks don’t have the ammo to make a blockbuster trade, and no mega-star free agent is going to be pounding on Horst’s door, begging to play in Milwaukee. Last summer, the Bucks couldn’t even convince their No. 1 free-agent target, little-known Kent Bazemore of the Atlanta Hawks, to relocate to Beer Town.

Now, even if the Bucks could persuade a certifiably good free agent to join them, they probably still couldn’t pull it off. That’s because Hammond left the Bucks in salary-cap hell. They are already committed to approximately $110 million in player salaries for next season — $11 million over the cap. And that doesn’t include re-signing veteran swingman Tony Snell, whom the Bucks heisted from the Chicago Bulls in a trade for Michael Carter Williams. (Another side note: a bigwig in the Bucks’ organization said it was recently-fired Bucks assistant general manager Justin Zanik who did the leg work and vehemently pushed for the trade, which was unquestionably one of the team’s best moves in eons.)

So, barring a virtual miracle, barring some incredible trade in which another team is willing to take a significant salary off their hands, the Bucks won’t be able to land a legitimate backcourt player to complement the Greek Freak. They aren’t in a position to sign Jeff Teague or George Hill or Kyle Lowry or Jrue Holiday. (One final side note: last year a member of the New Orleans coaching staff told to me, ‘’Jrue would be absolutely perfect for the Bucks. He and Giannis together? Are you kidding me?’’

Indeed, pair Antetokounmpo with another All-Star caliber player and the Bucks instantly join Cleveland, Boston, Washington and Toronto as the EC’s upper-echelon teams.

But because of their litany of mistakes, like overpaying for Mirza Teletovic, Matthew Dellavedova, John Henson, Greg Monroe and, in case you forgot, Larry Sanders ($5 million), the Bucks figure to be minor players during free agency and a middle-of-the-road team again next season.

The NBA official was right: Horst should have never acknowledged being part of the Bucks’ decision-making process. It doesn’t make him look good.