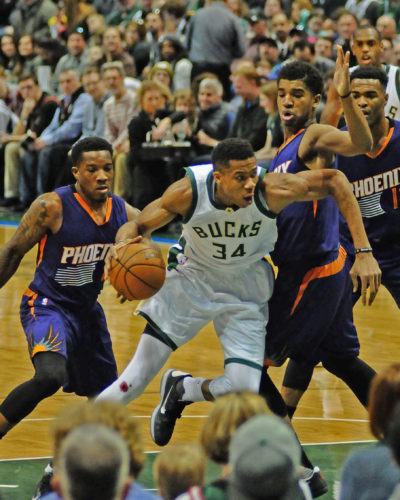 I had a chance to chat with a few NBA officials on Wednesday about what is shaping up to be one whale of a series between the Bucks and Raptors, and they had some intriguing observations and compliments about the Bucks. Here are some of them:

While the Bucks are a relatively young team, with two rookies (Thon Maker and Malcolm Brogdon) in the starting lineup, one longtime NBA official said he was thoroughly impressed with the Bucks’ poise and focus, especially in Game 1 when they beat the Raptors in Toronto.

“The first thing that stands out for me is that, even being so young, the moment wasn’t too big for them,’’ he said, referring to the Bucks. “And (Giannis) Antetokunmpo – I don’t know how old he is, 22 or 23 or whatever – but he didn’t shrink on the big stage even with all the responsibilities he has. Maybe he’s too young and doesn’t understand the situation, but he’s been great.’’

Said a veteran NBA scout who watched Game 1 on television and then later on tape: “I was very impressed with the Bucks. Toronto is a tough place to play and they won the first game and probably should have won the second game.

“I think Toronto is a pretty good team, but they have made them look ordinary so far.’’

While the Bucks won the first game, the Raptors countered by winning the second game. Yet, another scout said it reminded him of last year’s series between the Raptors and the Pacers.

“To me, this series is eerily similar to that series,’’ the Western Conference scout said. “Indiana stole a game on Toronto’s court and then Toronto stole a game on Indiana’s court. Milwaukee stole one in Toronto, and now I expect Toronto to steal one of the next two games in Milwaukee.

“I expect the series to go back and forth the rest of the way and be a seven game series. I think Toronto will win because I don’t think Giannis has enough help. To win this series, he’s going to need help.’’

The Bucks’ offense sputtered in both games, especially so when the Raptors had time to set up their defense in the half court.

Added a front office executive: “They (the Bucks) do keep it simple, but I actually think their offense is a little underrated. They have a lot of versatility, guys who are interchangeable. They could have Giannis on the elbow one time and then the next time have (Matthew) Dellavedova on the elbow. They have a lot of flexibility with the guys they have.’’

Bucks coach Jason Kidd has started the 20-year-old Maker in both games against the Raptors, something that surprised an NBA official whose team has been a consistent playoff participant.

“I know Maker had been starting for them in the regular season, but this is the playoffs,’’ he said. “I’m more old school. I want veteran players on the court, veterans like Monroe. This isn’t the time to groom guys.’’

When asked what the Raptors have to do to win the series, everyone I conversed with responded with virtually the same answer:

“Lowry has to play well,’’ an NBA talent evaluator said of Raptors point guard Kyle Lowry. “He didn’t play well in the first game and they lost. He played much better in the second game and they won.’’

Previous: History Is On The Side Of The Bucks
Next: Tapp-ing Into The Numbers: Warriors Join Exclusive 60-Win Club