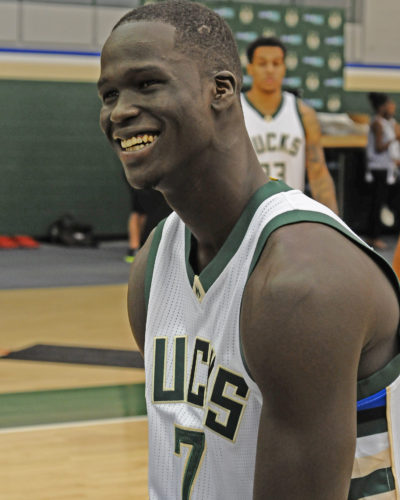 Home » Gery's Blog » History Is On The Side Of The Bucks

If you believe in history, the Milwaukee Bucks are in the driver’s seat.

After winning the first game of their Eastern Conference best-of-seven game series on Saturday, history strongly suggests the Bucks will be moving on to the second round – even though they still need to win three more games.

The Bucks pulled off a stunning upset by defeating the Raptors 97-83 in Game 1 in Toronto. It was a huge victory for the Bucks, whose confidence has soared with the triumph and know all the pressure is now on the Raptors.

Last season, six of the eight Game 1 winners advanced to the second round.

Two years ago, all eight Game 1 winners advanced to the second round.

Indeed, the odds are heavily tilted toward the Bucks winning this series and advancing to the second round for the first time since George Karl’s team in 2001.

Here is a breakdown of how Game 1 winners in first round series have fared the last six seasons:

Thrown into the fire

Only three rookies were in the starting lineup for Game 1 of the playoffs: The Bucks’ Malcolm Brogdon and Thon Maker and Atlanta’s Taurean Prince.

Being so young and playing by far the most important game of his life on Sunday, Maker had to be a tad nervous, right?

“Nah, I wasn’t nervous,’’ Maker said. “I was very excited; I was really hyped. I’ve never been that excited for a game. But nervous? Nah.’’

Maker acquitted himself nicely in the 15 minutes he was on the floor. He made both of his field-goal attempts, grabbed three rebounds and, most importantly, blocked three shots.

Some NBA observers felt the Raptors were going to exploit Maker’s lack of strength and weight by going to veteran center Jonas Valanciunas in the low post. Valanciunas is listed at 255-pounds, while Maker said he weighs 219 pounds – a  significant 36-pound difference.

But the Raptors seldom went to Valanciunas when Maker was on the floor, not that Maker would have been overly concerned. Valanciunas took only five shots in 24 minutes and finished with nine points, three under his regular-season average.

“I never worry about my weight or strength,’’ Maker said “You just got to go hard every single time.’’

Maker knows the Raptors will be playing harder in Game 1 than they did in Game 1. He realizes they can ill afford to be down 2-0 in the series.

“They definitely are (going to come out fired up),’’ Maker said. “We got to come out the same way and be even more aggressive. I know they’re going to be way more aggressive, so we have to have that mind-set going in that we’re not satisfied.’’

Previous: Tapp-ing Into The Numbers: Players Who Have Had Multiple Games Of 3 HRs
Next: NBA Official – Bucks Make Raptors Look Ordinary