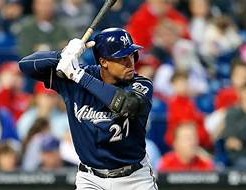 Home » Guest Post » Can any of the Brewers’ newcomers match Carlos Gomez’s debut?

When (or if) the 2020 Major League Baseball season begins, the Brewers will have several new players who have never suited up in a Brewers uniform who will likely play important roles for the club.

Players like outfielder Avisail Garcia, catcher Omar Narvaez, infielders Justin Smoak and Luis Urias, and pitchers Brett Anderson, Eric Lauer and Josh Lindblom will be making their debut with the Brewers in 2020 (hopefully).

The question: When they do make their debuts, will they start with a bang or a whimper? When compared to other Brewers, will any of these new players have a Brew Crew debut like Carlos Gomez?

After coming to the Brewers in a trade with the Twins, Gomez (pictured above) made his Brewers debut on April 5, 2010 with four hits in five at-bats, a solo HR and a stolen base.

Or will any of the pitchers have a debut like Yovani Gallardo? Making his MLB and Brewers debut on June 18, 2007, Gallardo was the starting pitcher and winner in the Brewers 5-4 win over the San Francisco Giants. Gallardo went 6.1 innings and allowed only four hits and struck out four in the victory.

Let’s take a look at some of the Brewers debuts for some of the club’s top players over the years. Baseball-Reference.com on the Brewers’ team page lists the team’s Top 24 players in franchise history based on each players’ WAR rating (WAR stands for Wins Above Replacement). The stat gives a number to each players’ overall contribution to the team. Robin Yount tops the Brewers franchise with a 77.3 WAR, followed by Paul Molitor (60.0) and Ryan Braun is third (46.8).

Here is a snapshot of the top 24 Brewers player’s debut with the team.

In addition to the above 24 players, the Brewers have five more players who played with the team who are members of baseball’s Hall of Fame (in addition to Yount and Molitor): Rollie Fingers, Hank Aaron, Ted Simmons, Trevor Hoffman and Don Sutton. Their Brewers debuts went as follows:

Trevor Hoffman, April 27, 2009: one inning pitched, no hits, no earned runs (came in as a reliever, no decision)

Previous: Brewers’ draft picks boast big upsides
Next: A blast from the past: Breaking down the epic McGwire-Sosa home run race