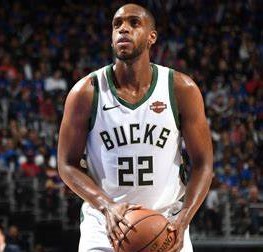 Ever since Giannis Antetokounmpo began his NBA career in 2013, he has been a train wreck at the free throw.

But here’s a suggestion that could perhaps finally rectify Antetokounmpo’s free throw shooting woes: Seek the advice and insight of his teammate and friend James Khristian Middleton.

Most NBA fans know Middleton as one of the NBA’s deadliest mid-range shooters but fail to realize he’s just as lethal from the free throw line.

Unlike Antetokounmpo, Middleton has gotten better as his pro career as progressed. He is not only one of the NBA’s best free throw shooters today; he’s one of the best in the history of the league.

The lowest percentage Middleton has ever shot in his 11-year pro career is .837, that coming during the 2018-19 season. And that was anomaly.

Middleton’s career free throw percentage is a white-hot 88.1. And that ranks Middleton as the 17th best free throw shooter in NBA history.