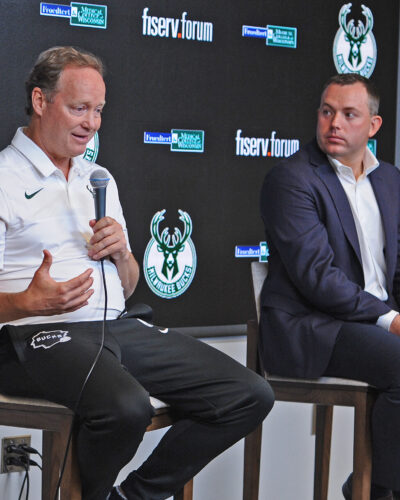 Home » Gery's Blog » Bucks are good but could they be better with full-time advance scout?

Professional sports are ultra-competitive and cutthroat. Pro teams will virtually do anything in their power to win.

That’s why they are constantly seeking ways to gain an edge over their competitors and willingly to dole out big bucks to provide their players with dieticians, psychologists, massage therapists, etc.

For decades, NBA teams have attempted to garner an advantage via advance game scouting. They hire highly knowledgeable basketball individuals who provide their respective teams with in-depth intel on their next opponent

Some teams even have two full-full advance scouts on their payrolls. Those teams are obviously convinced the money invested on those scouts is well worth it.

“We have a full-time scout and there’s no doubt in my mind he helps give us an edge,’’ an NBA general manager said.  “This is a big business so we are always looking for something in which we can get out front of the other teams and this is one way.’’

The advance scout provides copious notes on an opposing player’s tendencies, whether he’s on top of his game or whether he’s struggling and might be vulnerable in specific situations.

Advance scouts not only keenly observe the players on the court; they pay close attention to the head coach as well. They monitor what kind of plays a head coach may call at certain points in the game, like after a timeout and especially at crunch time with the game on the line.

“The advance scout’s main job is to get or see a play call whether it’s by the coach or by a player,’’ a former NBA head coach who once did advance scouting. “If the advance scout knows what play is called, and then passes the information along to his team, it can help the way you set up your defense and be prepared for what could happen.’’

One of them is the Milwaukee Bucks. For much of their existence as a franchise, the Bucks had a full-time advance scout on their staff.

But in recent years, that hasn’t been the case. And, at least on the surface, the Bucks seemingly don’t need one as they have been one of the NBA’s elite teams in recent seasons.

Yet, as good as the Bucks have been – they won the league championship two seasons ago – an advance scout wonders if they couldn’t be even better by allocating or redistributing more money toward a full-time advance scout.

“They’re a very good team, no doubt,’’ the advance scout said. “Having Giannis (Antekounmpo) helps. Helps a lot. As long as they have Giannis, they’ll be fine.

“But have you ever looked at the Bucks bench and seen all their people around it? It’s crazy all the people they have around their bench.

“And have you seen their traveling party, and how they don’t have a problem taking care of them and paying for them to stay at Ritz-Carltons or other high-end hotels?

“And they can’t hire a full-time (advance) scout and maybe be even better? Seriously?’’

While the Bucks seemingly haven’t made advance scouting a priority, they also don’t go out of the way to accommodate the other teams’ advance scouts who come to Fiserv Forum.

When Herb Kohl, and even before him Jim Fitzgerald, owned the Bucks, they felt, out of professional courtesy, to let advance scouts sit at courtside or close to it.

But under new ownership and a revamped front office, advance scouts – along with the media — are usually relegated to seats halfway up in Fiserv where hearing Bucks head coach Mike Budenholzer or a player call a play is almost impossible.

“To me, that’s b.s. They (the Bucks) are just so unprofessional about this.’’

So why haven’t the Bucks made a financial investment in a full-time advance scout?

Several NBA officials point to Budenholzer, who has been the Bucks head coach since 2018 and who cut his NBA teeth while working for the San Antonio Spurs and longtime coach Gregg Popovich from 1996-2013.

The Spurs have won multiple championships under Popovich, who was blessed to have superstars like Tim Duncan and David Robinson.

But now, no longer armed with big-time stars, the Spurs have foundered. They missed the playoffs the last two seasons and are well on their way to another non-playoff appearance.

“I think Bud (Budenholzer) saw that when he was with Pop.’’

“The Bucks and Hornets play each other, what, three times a season? That’s a strange situation.’’

The advance scout then paused, laughed and said, “I wonder what would happen if the Bucks and Hornets played each other in the playoffs? Does he (Steele) have to submit reports for both teams? Now that would be interesting.’’

Previous: Zielinski: Bears will barely beat Packers
Next: Zielinski: Packers will leave Rams out in the cold