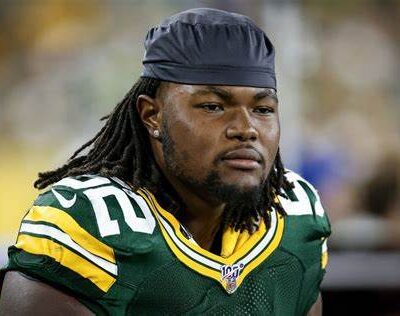 Four games this season … four games where Rashan Gary has a sack.

Gary collected a sack in his fourth straight game this season with a two-sack performance on Sunday against the New England Patriots. His stat line also included seven combined tackles, a forced fumble, and a fumble recovery. Significant work for the 4th-year Packer who was the team’s first round pick (12th overall) in the 2019 draft.

Gary’s run of a sack in four straight games this season puts him in some special company: He becomes the 11th player in Green Bay history to have a sack in four consecutive games. The team record is five games held by Kabeer Gbaja-Biamila and Tim Harris who each had sacks in five straight games in their careers. Gary will look to join this duo if he can secure a sack versus the New York Giants this Sunday in the Pack’s contest in London.

Here are the 11 Green Bay players who have had four or more consecutive games with a sack:

Matthews tops the above list with four times that he had sacks in four or more consecutive games. Harris did it three times, while Gbaja-Biamila, Jones and White each twice had streaks of four or more straight games with a sack in their careers.

There have been 40 times in the league where a player had at least one sack in seven or more straight games. Chris Jones of the Kansas City Chiefs in 2018 set the NFL record for most consecutive games with a sack with 11. Prior to that, DeMarcus Ware (Cowboys in 2007-08) and Simon Fletcher (Denver, 1992-93) held the record with 10 straight games with a sack.

Those 40 times where a player had seven or more consecutive games with a sack has been done by 36 players. Four players, Reggie White, DeMarcus Ware, Robert Mathis and Simon Fletcher) each accomplished this feat twice in their careers.

Previous: Zielinski: Packers will keep rolling
Next: Brewers hitters have a season not to remember