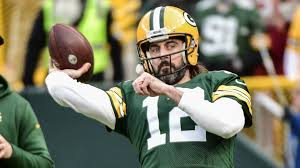 LONDON – When you have played as long as Aaron Charles Rodgers, you’ve pretty much seen and done everything.

But one senses Rodgers is pumped up – really pumped up – about the Green Bay Packers game against the New York Giants Sunday at Tottenham Hotspur Stadium, outside of London.

It is, after all, his first – and the Packers first – appearance playing in Europe. You know darn well Rodgers, with the spotlight firmly on him, wants to put on a show.

“This is not just a normal road trip even though the coaches speak is always, ‘Hey, we’re here to win a game. Yada, yada, yada,” Rodgers said. “This is definitely more special … This is one of those games, I  think at the end of your career when you think back on it, it’s going to be a special moment to be able to play in front of the fans here.’’

Certainly, the British media expects Rodgers to have a special game. Most of their stories on the game have focused on Rodgers and how he is walking legend and one of the greatest athletes to ever step foot on their soil.

Rodgers, who has been out and about in London (He took in a friendly soccer match between the U.S. and England), would love nothing more than to have a superlative performance and live up to the extraordinary hype that has been placed on his for this game.

But in order for the 38-year-old Rodgers to do that, he’ll have to play significantly better than he has in the first four games this season. Not that he played poorly in any of them, but he didn’t play up to his lofty standards.

In those four games, Rodgers never threw for more than 255 yards. He never threw more than two touchdown passes in any of those games. And Rodgers, who has made it an art form at protecting the football, has thrown an uncharacteristic three interceptions.

Rodgers had only four passes picked off ALL of last season. He’s never had more than six interceptions in the previous five seasons.

But there’s plenty of football still to be played this season and it’s a given Rodgers will eventually play like the reigning back-to-back MVP that he is – perhaps as soon as Sunday.

Previous: Brewers hitters have a season not to remember
Next: Packers should run past Giants