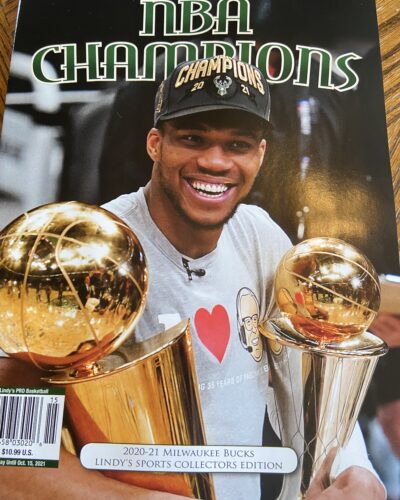 Home » Guest Post » Uncategorized » What does history tell us about the Bucks’ chances of repeating as NBA champs?

Who are you picking in this year’s NBA playoffs?

From what I have read, the Phoenix Suns are a popular pick for this year’s title. The Suns had the best regular season record this season at 64-18, the only team to win 60 games this year. They have recent NBA Finals experience having lost to the Milwaukee Bucks last season in six games.

The Bucks have also been receiving some love for this year’s title as a few pundits are predicting the Bucks will be the first team to win back-to-back championships since the Golden State Warriors went back-to-back in 2017 and 2018.

There are also a handful of dark horse teams that could win the title. In the Eastern Conference, the seventh seed Brooklyn Nets and fourth seed Philadelphia 76ers could make long post-season pushes; the same with Memphis and Golden State in the Western Conference.

Is it possible that last year’s playoffs may help determine who will win the title this year? Can a team’s finish the previous year in the post-season predict what they might do this season?

The most common scenario, however, was six teams won the title the year after losing in a conference semi-final. Here is a breakdown of how each champion in the 2000’s ended their season the year before their title:

Lost in the conference semi-finals the previous year … 6 times

Lost in the NBA Finals the previous year …5 times

Lost in the conference finals the previous year … 2 times

Lost in the conference first round the previous year … 2 times

If we try to predict the 2022 NBA champion based on the previous 22 years, picking either the Bucks or the Suns is a good bet since 10 of the 22 champs since 2000 played in the NBA Finals the previous year. But losing in the conference semi-finals was also a strong indicator, happening six times in the 22 years. If you are looking for a team that might come out of that scenario, four playoff teams this year lost in the conference semi-finals last season: Philadelphia, Brooklyn, Utah and Denver.

If you are looking for a long shot based on these numbers, the Atlanta Hawks are the only 2022 playoff team that lost in a conference final last year; four 2022 playoff teams lost in the first round of the playoffs last season (Miami, Boston, Memphis, and Dallas).
Only two teams since 2000 have won a title after missing the playoffs the previous season: Boston-2008 and the L.A. Lakers in 2020. Five of the 16 teams remaining in the playoffs this year missed the playoffs last season: Toronto, Chicago, Golden State, Minnesota, and New Orleans. Is it possible one of those five could make a push for this year’s title?

Previous: History implies Packers should hit it big by drafting a receiver in first 3 rounds
Next: Packers don’t need a center, but they could still draft one … in the first round