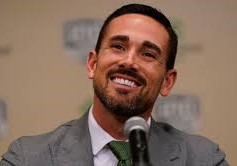 INDIANAPOLIS – There are some NFL coaches who, once the season is over, try to get as far away from football as possible.

They prefer not immersing themselves in the draft, letting their general manager and scouting personnel deal with the process.

That isn’t the case with Matt LaFleur.

The Packers head coach embraces the draft and attempts to glean as much intel on a potential draft pick as possible. He’ll watch video on draft prospects and regularly sits in on the formal, 15-minute interviews teams are allowed to conduct at the Combine.

To LaFleur, this is imperative. To him, the interviews can reveal a player’s mental make-up and perhaps indicate whether that player will succeed or fail at the pro level.

When asked the degree to which he was involved in the draft-decision making, LaFleur quickly responded, “We are very involved. Absolutely. Sitting through the interview process, I think, that’s as big a part as any of it, trying to find out what these guys are all about. What makes them tick. What type of people they are, how competitive they are, how much they love football.

“I do think there’s a commonality amongst the guys that you think you can get the most out of and help them really reach their potential, whatever that is.

“They all love ball, and they love to compete, and most of these guy who reach that are smart guys that have a process. It’s not just football when we’re in the building. They’re thinking about it at home, just doing all the little extra things to help them be the best version of themselves.’’

While LaFleur is actively involved in the draft, he is more of an observer than participant when it pertains to player salary issues and team’s salary cap.

“I think Russ Ball does an outstanding job with that,’’ LaFleur said.  “Obviously, I’m part of the conversations. But that’s really not my expertise in terms of the finer details of how it all fits together. But I’m learning it.’’

Previous: Draft could be godsend for Packers
Next: Milwaukee’s Baldwin ready to take his game to next level