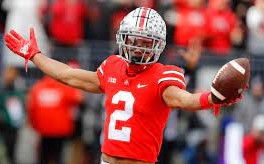 Home » Gery's Blog » Draft could be godsend for Packers

INDIANAPOLIS – The Green Bay Packers won’t be in a position to draft any of the elite prospects in the upcoming NFL draft.

But that doesn’t mean the Packers can’t fill some conspicuous needs on their roster. In fact, if you listen to some general managers, this draft is tailor-made for the Packers.

At the NFL Combine Tuesday in Indianapolis, Jacksonville general manager Trent Baalke cited three positions in which he felt the draft was laden with talent. Each is a distinct Packer need.

“We met a lot of those guys last night,’’ Paton said of the receiver prospects. “There’s some real good receivers in the draft again.

“Some different flavors, depending on what you’re looking for. There’s value at the top and throughout the draft (with receivers).’’

The Packers clearly could use a receiver, whether star Davante Adams returns or moves on. They could also use a defensive end who is a legitimate pass rusher, and an offensive tackle with the uncertain status of Billy Turner and David Bakhtiari still on the comeback trail after major knee surgery.

According to several NFL scouts, here are some defensive ends, wide receivers and offensive tackles who could be available for the Packers, who currently have the 28th overall pick in the draft:

Defensive ends – George Karlaftis of Purdue, Logan Hall of Houston, Travon Walker of Georgia, Arnold Ebiketie of Penn State and Boye Mafe of Minnesota, who some scouts consider an outside linebacker.

Of course, any of the aforementioned players could see their draft stock rise or fall based on the combine showing.

Previous: NFL’s Wisconsin fraternity about to expand
Next: LaFleur immersed in draft process