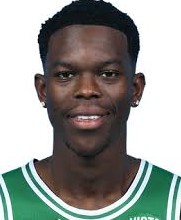 The NBA trade deadline is Thursday afternoon and the Milwaukee Bucks are seriously exploring their options.

As I reported last week, the Bucks are shopping shooting guard Donte DiVincenzo and he’s drawing interest from several teams.

Boston may have the most interest in DiVincenzo and are more than willing to move veteran combo guard Dennis Schroder, whom the Bucks have had interest in for years.

Schroder was on the Bucks’ radar during the 2013 draft. That’s when the Bucks, with the 15th overall pick, chose Giannis Antetokounmpo. Schroder went two picks later to Atlanta.

The Hawks were coached at the time by Mike Budenholzer, who is now the Bucks coach. Schroder played five seasons for the Budenholzer-coach Hawks. Since then, Schroder has played for Oklahoma City, the Los Angeles Lakers and Celtics.

The Bucks, of course, aren’t the only team interested in Schroder. Another is Chicago, which is coached by Billy Donovan. Donovan is also quite familiar with Schroder, having coached him for two seasons in Oklahoma City.

If Schroder isn’t dealt by the deadline, some league officials believe the Bucks could still land him in a buyout.

The Bucks are also reportedly interested in Celtics forward Grant Williams. Said an NBA exec of Williams: “The Bucks know they have to find a defender after losing (P.J.) Tucker. Williams is a poor man’s Tucker.’’

While Schroder is one of several guards who have piqued the Bucks’ trade curiosity – another reportedly is Toronto’s Goran Dragic, although Dallas seems to be the frontrunner for him — , Milwaukee clearly wants another big man, especially with Brook Lopez possibly missing the entire season after undergoing back surgery.

Several league sources said the Bucks could be in the mix for Serge Ibaka of the Los Angeles Clippers, either in a trade or buyout. Ibaka is an outstanding mid-range shooter and would fit nicely into the Bucks’ offensive schemes.

Some other big men linked in trade rumors with the Bucks are Portland’s Jusuf Nurkic, Orlando’s Robin Lopez and Sacramento’s Richaun Holmes.

While DiVincenzo is the most prominent Buck mentioned in trade talks, some NBA officials claim the Bucks would be willing anyone on their roster with the exception of Antetokounmpo, Jrue Holiday, Khris Middleton and Bobby Portis.

That, of course, would mean starting shooting guard Grayson Allen and key reserve Pat Connaugton would be available at the right price, although neither would bring much back in return for the Bucks.

While Nets officials insist James Harden isn’t going to be dealt, more than a few NBA officials are skeptical. Harden remains the No. 1 target of the 76ers, who would send Ben Simmons. …. The Magic have two veteran guards who figure to draw interest from contending teams: Gary Harris and Terrence Ross. The Magic, according to sources, are seeking first-round picks for both players. … The Sacramento Kings have already made a significant multi-player trade, one that revolved around Tyrese Haliburton going to Indiana for Domantas Sabonis. The Kings appear ready to unload some other players as well, including Harrison Barnes and Marvin Bagley. Some championship-contending teams have made pitches for Barnes. … Atlanta’s John Collins has been mentioned frequently in trade speculation, but the prevailing sentiment among NBA folks is the Hawks will hold on to him.  … Numerous teams wouldn’t mind taking Jerami Grant off the Pistons hands and Pistons seem to be receptive to trading him if they can acquire a quality young player or high draft pick as they continue their youth movement. Some NBA officials contend the surprising Bulls, just 1½ games out of first place in the Eastern Conference, would be a logical landing spot for Grant.

Previous: Middleton, Holiday are anything but locks for All-Star game
Next: Bryce Paup on LeRoy Butler: ‘He had my back’