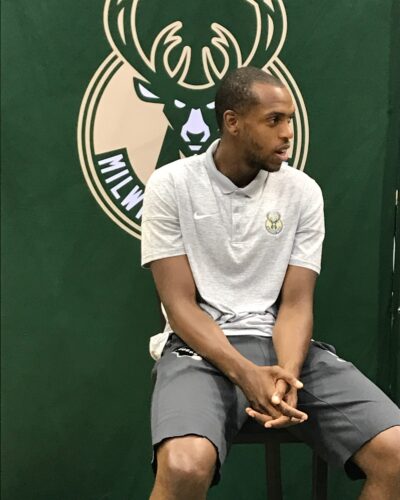 Home » Gery's Blog » Middleton, Holiday are anything but locks for All-Star game

Khris Middleton and Jrue Holiday were chosen to play for the United States in the Olympics in Tokyo last August.

But that doesn’t mean the Milwaukee Bucks standouts will be chosen for the upcoming NBA All-Star Game.

Both Middleton and Holiday, by all accounts, are on the fringe of being selected to the 12-member Eastern Conference team. That’s primarily because both players have missed a bunch of games this season – Middleton has been sidelined for 12 games and Holiday has been sidelined for 13 of the team’s 53 games – and because of the unusual parity in the conference, where 10 teams boast winning records.

Holiday, whose sole All-Star appearance was in 2013 while playing for Philadelphia, is averaging 19 points, 6.5 assists and 4.7 rebounds. He is shooting 49.5 percent from the field, 38.5 percent on 3-pointers.

The five starters for the Eastern team has already been determined: They are frontcourt selections Kevin Durant of Brooklyn, Joel Embiid of Philadelphia and Giannis Antetokounmpo of Milwaukee and backcourt selections DeMar DeRozan of Chicago and Trae Young of Atlanta.

The Eastern Conference coaches have chosen seven reserves who’ll be formally announced Thursday night. Since Durant isn’t expected to play because of a knee injury, another player will be added to replace him.

The general consensus among NBA observers is that neither Holiday nor Middleton will be tabbed to play in the All-Star Game on Feb. 20 in Cleveland.

Holiday and Middleton also drew little support from their peers in voting. Middleton received just two votes and ranked a mere 32nd among frontcourt players, while Holiday received nine votes in the player voting and ranked 14th among EC guards.

The Miami Heat are one-game behind Chicago in the EC standings, and are virtually assured of one All-Star.

Which one is the question: Jimmy Butler or Tyler Herro?

If the coaches based their decision on reputation, Butler will get the nod. Certainly, he’s got the numbers: 21.8 points, 6.4 assists and 6.3 rebounds. But Butler, like Holiday and Middleton, has missed a bunch of games, playing just 33 of the Heat’s 52 games.

Herro, on the hand, has played in 10 more games than Butler, and has compiled equally strong numbers: 20 points, 4.8 rebounds and 4 assists.

Bucks guard Grayson Allen got two votes in the player voting, presumably not one from Alex Caruso. … Caruso got one vote from the players, presumably not from Grayson Allen. … Allen’s two votes were one more than Bucks teammate Bobby Portis received in the player voting. Portis, who has fashioned a nice season (14.9 points, 9.2 rebounds) after replacing the injured Brook Lopez in the starting lineup, ranked a mere 54th in frontcourt voting by the players. … Neither Antekounmpo will not receive any bonus money for playing in the All-Star game  and neither will Middleton, if selected. But Holiday would collect a $300,000 if he becomes an All-Star. … If 20-year-old LaMelo Ball is chosen to the All-Star Game, he’ll be one of the youngest players ever in the mid-season showcase. Kobe Bryant was the youngest at 19 years old, while LeBron James, Magic Johnson, Zion Williamson and Kevin Garnett were also 20 years old. … Milwaukee hasn’t hosted an NBA All-Star Game in more than three decades, that being in 1977 when Julius Erving was the MVP. Milwaukee won’t be getting the All-Star game in the near future, either. The 2023 All-Star Game will be held in Salt Lake City, and 2024 All-Star Game will be held in Indianapolis.

Here are my choices for the EC reserve, along with Durant’s replacement (Note: NBA rules require three frontcourt players, two guards and two wild-cards for the seven reserves):

Previous: DiVincenzo’s days with Bucks may be numbered
Next: Celtics Schroder has ties to Bucks