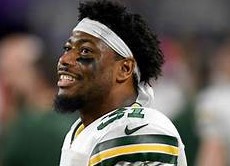 The Packers’ secondary may be the primary reason for the defensive unit’s impressive success this season.

The secondary, which consists of starting cornerbacks Eric Stokes and Rasual Douglas and safeties Adrian Amos and Darnell Savage, has performed admirably against the pass this season.

Heading into tonight’s game against the Vikings at Lambeau Field, the Packers rank 10th in the league in passing defense, allowing 216 yards a game

But the Packers’ defensive backs have been more than just good cover guys; they have also been highly proficient tacklers.While De’Vondre Campbell, their outstanding inside linebacker, leads the team in tackles with 138, Messrs. Amos, Savage, Douglas and Stokes account for four of the next five top tacklers on the team.

Amos ranks second on the team with 84 tackles, and Savage is fourth with 58. Douglas and Stokes are fifth and sixth with 53 and 49 tackles, respectively.

Those totals vividly indicate Amos, Savage, Stokes and Douglas aren’t afraid to get their uniforms dirty. They’re willingly good tacklers — unlike so many defensive backs around the league who are strictly cover guys.

If the secondary continues to excel in coverage, and in tackling, the Packers’ goal of advancing to the Super Bowl will be greatly enhanced.