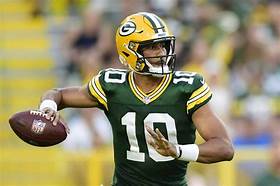 The Green Bay Packers have little at stake today.

Whether they beat the Detroit Lions or not, the Packers are still playoff bound and will have a first-round bye, thanks to securing the best record in the NFC this season.

On the other hand, the Lions could have a lot to lose by winning. The Lions are in a heated battle with the Jacksonville Jaguars for the No. 1 pick in the draft. The Jaguars have the inside track, boasting a 2-14 record compared to the Lions 2-13-1 mark.

The Jaguars could clinch the top pick by losing to the Indianapolis Colts today, something that seems inevitable considering the Colts need the victory to earn a playoff spot. The Colts, as one would imagine, are heavy favorites to prevail with the Vegas oddsmakers making the Colts 14.5 point favorites.

Still, there have been some strange occurrences in the NFL this season – as the Lions well know. They stunned the world and the Arizona Cardinals three weeks ago. That’s when the Cardinals were battling for the No. 1 seed in the NFC playoffs, only to see those dreams go up in smoke when they smoked by the Lions 30-12.

It was the second time Lions beat the odds this season, having upended the Minnesota Vikings two weeks earlier 29-27 when the Vikings appeared on their way to the playoffs.

So, the Lions aren’t as pathetic as their record indicates. Then, again, just last week, they were annihilated by a below-average Seattle team 51-29.

The Packers are a well-above average team and, even if even Jordan Love takes over for Aaron Rodgers after a series or two, they should still dominate. They should easily cover the Vegas spread — which is 3 points — and finish their storybook regular season with a league-best 14-3 record.

Previous: Packers secondary is primary reason for defense’s success
Next: Love has opportunity to showcase skills