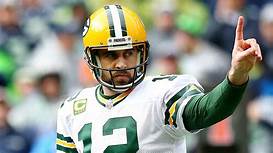 Aaron Rodgers is in the midst of one of the best stretches of games in his illustrious career.

And that’s saying a lot.

Rodgers, a sure-fire first-ballot Hall of Famer, has been simply sensational in the last three games. To wit:

Rodgers’ brilliant play in this three-game span has vaulted him into the MVP conversations, joining Tampa Bay’s Tom Brady and Indianapolis’ Jonathan Taylor.

Look for Rodgers to bolster his MVP cause even more today.

That’s because Rodgers will be facing a Baltimore Ravens’ secondary that is flat-out bad. The stats bore out the Ravens’ coverage problems. They rank 31st – or second last – in the league in passing yards per game at 266.1.

So, on the surface at least, it seems like the perfect storm for Rodgers to have another monster game,, although much will hinge on how the Packers’ make-shift offensive line holds up.

The O-Line has performed at a high level for most of the season, but especially in recent weeks when Rodgers has gone on a tear. In fact, while the O-Line surrendered three sacks to the Bears last Sunday, they allowed only five sacks in the previous four games.

The Ravens love to bring the pressure, but if the O-Line does it job, and if Packers running backs Aaron Jones and AJ Dillon do theirs and pick up the blitzes, the Packers will take another big step toward securing the No. 1 spot in the NFC playoffs.

Previous: Packers should ‘bearly’ break a sweat
Next: Zielinski: Packers will be up to the challenge