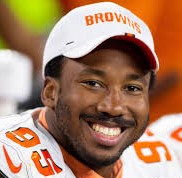 Despite the Browns’ strengths, they also have plenty of flaws that have kept them from replicating last season’s success, which included a playoff victory. If the Browns hope to beat the Packers, they will have to rely heavily on running back Nick Chubb. They also will have to slow down Packers quarterback Aaron Rodgers.

Rodgers is having a tremendous season and is the favorite to win the MVP award. The Packers’ offense is firing on all cylinders and really doesn’t have a weakness. They are built to play in cold weather and typically perform well at home.

The Packers are playing extremely well, and I doubt the Browns will keep up with them.

Previous: Zielinski: Packers will be up to the challenge
Next: De’Vondre Campbell isn’t overlooked by Packers