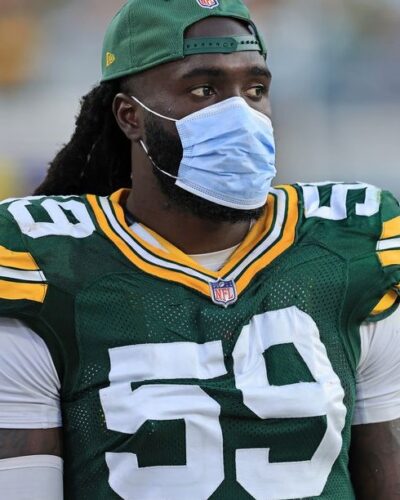 De’Vondre Campbell is now the NFL’s most underrated player.

The Packers veteran linebacker officially earned that designation when he was inexplicably bypassed as a Pro Bowl selection.

His omission was inexplicable. After all, you could build a compelling case that the 28-year-old Campbell has played his position as well as anyone in the NFL this season.

Campbell’s numbers are certainly Pro Bowl worthy: He ranks eighth in the entire 32-team NFL with 125 tackles and is third in the league in solo tackles with 83.

Campbell, next to tackle Kenny Clark (who was a Pro Bowl selection), is the player most responsible for the Packers’ emergence as one of the NFL’s best defensive teams and the NFL’s best team.

Campbell has been a consistent tackling machine all season but he’s taken his game to an even higher level in recent games. Two weeks ago, against the Rams, Campbell recorded 10 tackles. Last Sunday, against the Bears, he registered an insane 16 tackles.

The Packers could use another double-digit tackling performance today against the Browns. After all, the Browns have one of the league’s premier backs in Nick Chubb, who is capable of putting the Browns on his back.

Among Chubb’s numerous prime-time outings this season was a 161-yard effort against the Chargers on Oct. 10.

Chubb doesn’t mind getting physical and relishes running between the tackles. If that holds true today, he’ll be running into Campbell on many occasions. And, considering how Campbell has performed this season, at a Pro Bowl level, you have to like his chances of coming out on top.

Previous: Expect the Packers to stay on cruise control against Browns
Next: Zielinski: Packers will continue to click on all cylinders