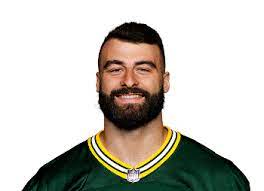 One of the major reasons the Green Bay Packers’ offense has sputtered for much of this season is a lack of productivity from their tight ends.

Last season, the Packers’ tight end corps was highly productive, primarily because of a breakout season by Robert Tonyan. The young tight end was targeted 59 times and had 52 receptions. Eleven of those catches were for touchdowns.

But this season, through 11 games, the Packers’ tight ends have been mostly invisible.  Tonyan didn’t come close to matching his contributions from a year ago, managing just 18 catches before suffering a season-ending knee injury after the ninth game.

The Packers’ other tight ends have been even more unproductive. Marcedes Lewis, known more for his blocking prowess, has only 12 catches. Josiah Deguara has 10 catches and Dominique Dafney and Tyler Davis have one apiece.

Collectively, Tonyan, Lewis, Deguara, Dafney and Davis have 42 catches. That, folks, isn’t many. In fact, there are eight – repeat, eight – tight ends who have as many or more receptions than the aforementioned Packers combined. They are:

With the playoffs fast approaching, with the Packers a certifiable Super Bowl contender, it’ll be imperative one of the Packers tight ends emerges as a legit target to replace Tonyan.

Deguara seemingly has the potential to be that guy. The Packers selected Deguara in the third round of the 2020 draft, so they obviously believe he possesses the talent to be a key contributor.

After suffering a torn ACL last season and having played behind Tonyan and Lewis, Deguara hasn’t had much of an opportunity to showcase his skills.

But he’s shown signs in recent weeks that he could make his presence felt down the stretch. He’s had eight catches on nine targets the last four games.

It wouldn’t be surprising if Deguara is targeted much more down the stretch, starting today when the Packers play the Rams in a key NFC game.