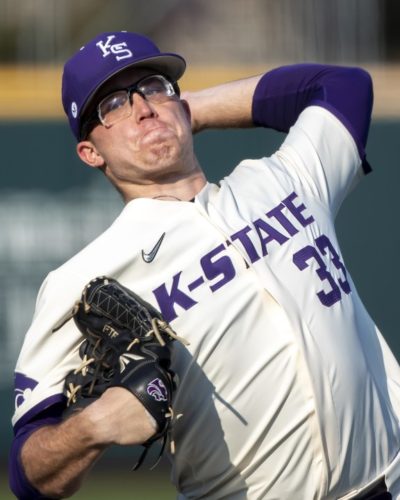 The Milwaukee Brewers used their first-round pick in the MLB draft on a college player in four of the last five years. The team’s front office tends to lean towards slightly more polished players with a proven track record against premium talent and some upside.

This year, the Brewers own the 15th overall pick in the first round of July 11’s draft. It marks the highest the Brewers have drafted since 2017. However, with the unknown of who will be available and the amount of parity among the top prospects not considered potential top five picks, the Brewers could go in various directions with their first-round selection.

Below is a look at five players that could be in play for the Brewers with the 15th overall pick.

The 6-foot-3, 195-pound left-handed hitter offers an intriguing combination of average and power offensively and hits the ball to all parts of the field. He also displays a notable strike zone discipline.

Cowser is an above-average runner who uses his speed on the base pads and in the outfield. He has the intangibles to play center field in pro ball. Besides his athleticism, Cowser has strong defensive instincts and solid arm strength.

It will be interesting to see where Cowser lands in this year’s draft. He is receiving interest as high as No. 5 to the Baltimore Orioles. If he makes it past the Orioles, who are potentially looking to draft a college player for an underslot deal, Cowser likely will go between picks 10-15.

Frelick is a left-handed hitter who profiles as a top-of-the-order hitter due to his strong plate disciple and ability to hit for average and power.

He has done a tremendous job of consistently making contact and getting on base in his time at Boston College. The 5-foot-9, 175-pound hitter never will be a significant home run threat, but scouts believe he has room to tap into more power in pro ball.

Defensively, he is athletic and possesses solid speed that he uses in the outfield. He can play all three outfield positions, and some scouts believe he has the tools to play second base in pro ball. Out of high school, Frelick was an infielder.

The Orioles also are considering Frelick at No. 5, but he likely ends up going somewhere between picks 10-15.

Wicks (pictured above) is a 6-foot-3, 220-pound left-handed pitcher who throws a four-seam fastball, two-seamer, changeup, slider and curveball from a three-quarters arm slot and clean and low-effort delivery.

His fastballs sit in the low-90s with high spin rates. Wicks throws the best changeup in the 2021 draft class. It’s an elite offering that he throws with conviction and tunnels well off his fastball.

Wicks attacks the strike zone with all of his pitches. He is extremely competitive and dedicated to refining his craft. He profiles as a middle-of-the-rotation starter with some potential upside in the right development program.

Hoglund moved his way into top-10 pick consideration this spring until suffering an elbow injury and undergoing Tommy John surgery. However, when healthy, Hoglund is one of the best strike throwers in college baseball. He has exceptional control and command of his pitches and isn’t afraid to attack the strike zone.

The 6-foot-4, 220-pound right-hander throws a four-seam fastball, slider, changeup, and curveball from a low-effort and repeatable delivery. He has improved his fastball velocity over the last year, as it sat 92-95 mph this spring.

He profiles as a middle-of-the-rotation starter with some potential upside in the right development program.

Ford is a 5-foot-10, 200-pound catcher who is athletic and has the skills to play multiple positions. He has played mostly catcher throughout his prep career, but scouts believe he can handle center field and second base, especially if a team wants to speed up his development.

Ford, a right-handed hitter, consistently barrels up pitches and drives the ball to all fields. He has the potential to be at least an average power hitter in pro ball.

The prep-catching demographic is the riskiest in the draft every year. The track record of prep first-round catchers panning out in pro ball isn’t excellent. But Ford’s well-rounded toolset is causing him to receive top-10 interest in this year’s draft.

Previous: Budenholzer still on the hot seat
Next: Bucks need to quit whining and play smarter