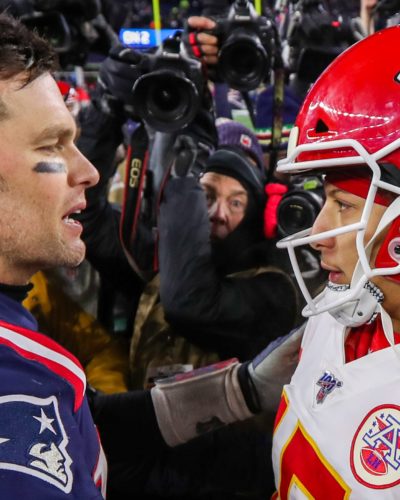 Talk about a gift from the sports gods
This matchup made in heaven features the G.O.A.T and his heir apparent. It features one quarterback that is married to a supermodel and the other married to his high school sweetheart. Hollywood couldn’t have written a better script.
This is Ali-Frazier. This is Magic vs. Bird. Exceot this is even bigger.
The TV ratings for this marquee matchup figure to be off-the-charts. CBS is going to make a killing.
Considering the enormous hype surrounding this encounter, can Brady and Mahomes deliver the goods and co-produce a show for the ages?
Absolutely.
Both Brady and Mahomes boast exquisite resumes and, except for a hiccup, have played at their customary high level down the stretch of this pandemic-challenged season.
Brady had a rough outing versus the Packers in the NFC Championship, being picked off three times. Mahomes also had a rare poor game vs. Miami late in the regular season when he also had three passes intercepted.
But if you subtract those two subpar outings from each of their last five games, you’ll see Brady and Mahomes performed like the future hall of famers they’ll be. Mahomes passed for nine TDs and had one interception in that stretch and Brady was even more stellar with 12 TDs and one pick.
If Brady and Mahomes play to their extraordinary high levels — and there’s certainly no reason to expect otherwise from two guys that embrace being on the big stage — this game could go down as an all-time classic.
After what this country, what this world has endured in the last year, let’s hope that is indeed the case.
Prediction: Buccaneers 34, Chiefs 30.

Previous: Packers will need to be nearly perfect against the Bucs and G.O.A.T.
Next: UW-Whitewater’s Meinerz opens the eyes of NFL officials at Senior Bowl