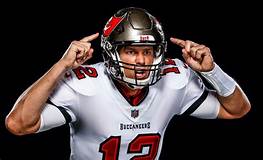 Home » Gery's Blog » Packers will need to be nearly perfect against the Bucs and G.O.A.T.

The situations are eerily similar and that’s not good for the Green Bay Packers.
Last season, the Packers took on the San Francisco 49ers late in the regular season. The 49ers smoked them 37-8.
The Packers and 49ers then met again in the NFC championship game and, again, the 49ers overwhelmed the Packers 37-20.
Fast forward to this season. Back on Oct. 18, the Packers traveled to Tampa, Fla., and faced the Buccaneers. It was billed as a showdown between two of the best teams in the NFC.

The Packers came out of the gates fast, like they have done virtually all season, and seized a 10-0 advantage. But it was all Tampa Bay thereafter. A couple of rare Aaron Rodgers’ interceptions fueled the Buccaneers’ comeback as they went on to record a convincing 38-10 triumph.
Now, just like the Packers did with the 49ers last season, they will play the Buccaneers for a second time this season … in the NFC championship game at Lambeau Field in Green Bay.
The Packers have played lights out for most of the season and seem to be peaking at the right time. But so are the Buccaneers. What’s more, the Buccaneers may be an even better team than the one that trounced the Packers three months ago.

After experiencing some shaky moments during the first half of the season, Bucs quarterback Tom Brady has clearly settled in with his new team and has been on fire. In the last five games, Brady has thrown 14 touchdowns passes and had only one pass picked off.

The Buccaneers’ running attack is noticeably improved since the first Packers-Bucs game this season with the emergence of Leonard Fournette. He racked up a team-high 156 yards in the two previous playoff games and, along with Ronald Jones II, gives the Buccaneers a dangerous one-two punch.
On the defensive side of the ball, the Buccaneers have been one of the premier teams in the league at stopping the run. They could be even more stout today. That’s because they have activated Vita Vea, a massive 347-pound run destroyer. Vea, who played in only five games this season after breaking an ankle in a game against the Chicago Bears Oct. 8, is fully healthy and figures to give Packers Pro Bowl center Corey Linsley fits.
Additionally, Vea plays in front of Devin White and Lavonte David, arguably the best set of inside linebackers in the game. Suffice to say, the Packers could have a rough time running between the tackles.
While the additions of Vea and Fournette are huge bonuses for the Buccaneers, the Packers could take a major hit if veteran cornerback Kevin King doesn’t play. King has been plagued by a bad back and didn’t practice Friday. It’s one thing to lose a player the caliber of King when you’re playing Mitchell Trubisky or Carson Wentz or Teddy Bridgewater. It’s whole different story playing Brady, aka the GOAT.
This game, as many prognosticators contend, could be a thriller, one that could be decided in the waning seconds The Vegas oddsmakers certainly believe this encounter will be close; they have pegged the Packers as 3.5 point favorites. But the feeling here is the Buccaneers will upend the Packers for a second time this season — just like the 49ers did last season.
Prediction: Buccaneers 30, Packers 24.

Previous: Zielinski: Packers seem to be destiny’s darlings
Next: This Super Bowl has all the makings of a classic