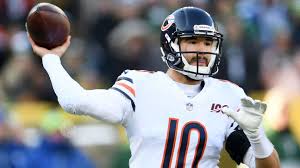 Sunday’s game between the Green Bay Packers and Chicago Bears has huge implications on the NFC playoff picture. The Packers (12-3) can secure the NFC’s top playoff seed, while the Bears (8-7) need to win to secure a playoff spot.

The Packers have won 18 of the last 21 games in this series. They defeated the Bears 41-25 in the first meeting this season. In that contest, Bears quarterback Mitchell Trubisky turned the ball over three times.

But in recent weeks, Trubisky has displayed improvement. In the five games since the Bears reentered Trubisky as their starting quarterback, he has completed 68% of his passes for 1,243 yards, 10 touchdowns and four interceptions. It has caused some to wonder if Trubisky is the quarterback of the future for the Bears.

Overall, the Bears have scored 30-plus points in four consecutive games for the first time since 1965. Besides Trubisky’s encouraging play, the Bears also feature a legitimate running attack lead by David Montgomery.

The Packers look unstoppable right now after a dominating victory over the Tennessee Titans last Sunday at snowy Lambeau Field. Packers QB Aaron Rodgers will be the NFL MVP after a tremendous season while the defense has stepped up and produced respectable results.

This will be a closer matchup than the Week 12 game at Lambeau Field. Although the Bears are playing well and in need of a victory, it’s just hard to pick against the Packers right now.

Previous: Dillon becomes second youngest Packer to score a pair of TDs in a game
Next: O-Line has been Packers’ unsung heroes