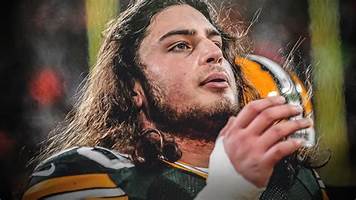 Aaron Rodgers has led a charmed life this season.

The Green Bay Packers hall of fame in-waiting quarterback has gone into virtually every game with the peace of mind that his body wouldn’t be subjected to an inordinate amount of harm. He has known his offensive line, one of the best in the business, would be his guardian angels.

Through the Packers’ 15 regular-season games this season, Rodgers has been sacked more than once in just three games. On four occasions, Rodgers was never sacked. In eight others, he was sacked only one time.

The protection Rodgers has been afforded this season is one of the principal reasons he has thrived and thrown 44 touchdown passes and has had only five interceptions. It’s also the primary reason Rodgers is waging a tightly contested race with Kansas City’s Patrick Mahomes for MVP honors.

For the season, Rodgers has been sacked a mere 19 times — even though the Packers had to frequently juggle their offensive line because of injuries. Rodgers’ quarterback colleagues haven’t been as fortunate.

Philadelphia’s Carsen Wentz has been sacked 50 — repeat, 50 — times and you wonder why he’s struggled so immensely.

Seattle’s Russell Wilson and Houston’s DeShaun Watson have had to run for their lives, too. Watson and Wilson each have been sacked 45 times.

Two other quarterbacks — the Giants Daniel Jones and Atlanta’s Matt Ryan – have hit the turf 43 and 40 times, respectively.

Rodgers would undoubtedly be even more thankful if the Packers offensive line continues its yeoman’s work the rest of the season. That won’t be easy, though. Bakhtiari, arguably the game’s best offensive left tackle, won’t be available after recently suffering a season-ending knee injury in practice. You would be naive to believe his absence won’t be felt.

Yet, if any group can withstand Bakhtiari’s unfortunate injury, it’s this gritty group of Packers O-linemen. In fact, they convincingly showed they can get the job done without Bakhtiari during weeks 7 through 9. In that stretch, the Bakhtiari-less line allowed only one sack in games against San Francisco and Minnesota and didn’t give up a sack against Houston.

Will they be up to the test again today against the Bears and their highly formidable defense? I wouldn’t bet against them.

Previous: Zielinski: Bears are better but not good enough to beat Packers
Next: Jerry Tapp: It’s been a record-setting season for Packers