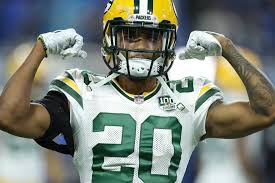 The Green Bay Packers have won three straight games and have the best record in the NFC.

On Saturday night, the Packers (10-3) will welcome the Carolina Panthers (4-9) to Lambeau Field. The Panthers are better than their record indicates, as they have lost six games by a touchdown or less.

But the Packers are maybe the hottest team in the NFL, led by MVP frontrunner and quarterback Aaron Rodgers. The Packers boast the NFL’s top-scoring offense and face a favorable matchup, as the Panthers have an average pass rush and secondary.

The Panthers have an intriguing offense led by quarterback Teddy Bridgewater. The former Minnesota Vikings signal-caller has had an average season for the Panthers but has numerous weapons around him.

The Panthers won’t have star running back Christian McCaffrey. Mike Davis is a worthy replacement for McCaffrey, though. Bridgewater also has a trio of receivers to throw the ball to in D.J. Moore, Robby Anderson and Curtis Samuel. The Packers will be tested and need cornerbacks, like Kevin King (pictured above), to step up on Saturday.

The Packers can’t afford a misstep if they want to earn the NFC’s top playoff seed.

Previous: Winning the time of possession battle usually means winning the game for Packers
Next: Packers offense may put on a clinic today