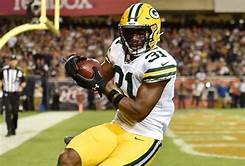 Home » Guest Post » Passing on the turnovers pays off for Packers

Here are some of the numbers that helped define the Packers 24-16 win over the Carolina Panthers in Green Bay on Saturday:

— This was the sixth game this season where the final outcome was eight or fewer points. The Packers are 4-2 in those one-score games.

— The Pack has now won six of their last seven games played on Saturday.

— Green Bay has now won four of their last six games versus the Panthers. Ironically, they beat Carolina by the same score, 24-16, in 2019. Each of the last four games against the Panthers was decided by eight points or less.

— Aaron Jones had 20 carries for 145 yards in the game. The 145 yards tied for the third-most rushing yards in a regular season game for Jones. It was also the 11th 100-yard rushing game in his career. The Packers are 10-1 in those games.

— Rodgers had only 143 yards passing in the game. In all the games he has started at QB for the Packers, it was the eighth game of his career where he was under 150 yards passing. It was, however, the first of those eight games that the Packers won.

— Davante Adams has seven receptions for 42 yards, 6.0 yards per catch. That 6.0 yards per catch was the lowest in a game since a November 3, 2019 game against the L.A. Chargers. It was tied for the sixth lowest yards-per-catch in a game (games with at least one reception) for Adams of his 98 career regular season games.

— Green Bay had 29:09 time of possession in the game, only the fourth game this season where they lost the T.O.P. stat to their opponents.

— Za’Darius Smith had sack in the game. He is the first Packers defensive player to have 10 or more sacks for the team in back-to-back seasons since Clay Matthews did it in 2009 and 2010.

Previous: Packers offense may put on a clinic today
Next: Nets, Heat move past Bucks in Eastern Conference pecking order